A while back, I wrote a post about the five best restaurant meals I'd ever had. It wasn't easy to cut the field to five since I've been fortunate enough to have had many great restaurant meals over the years. The other day, a friend and I were talking about the great selection of beers that are widely available these days and he asked me what my favorite beer was.

I'm rarely speechless, but in this case I stuttered, stammered and started spitting our various names along the lines of "well, there's xxxx, but wait, I can't forget yyyy, oh jeez, then there is zzzz." This went on for a while until I finally admitted that there wasn't a singular answer. As I noted in the restaurant post, sometimes it's the time, the place, the company and in this case, the food you're eating at the time that makes a beer memorable. My friend convinced me to try to define the five best beers I've ever had and do my best to recall the "when and where".

So, in no particular order, here goes. These are not necessarily my five favorite beers (although some of them are) but they do represent some very memorable moments in my beer experience. 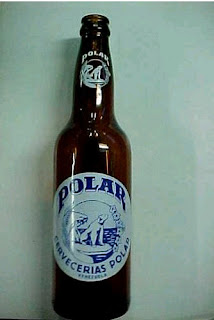 Who can forget their very first beer? Well, OK, maybe you can, but I haven't. I was in, of all places, the Andes Mountains of Venezuela on vacation with my parents. We were on a cruise that had Caracas as one of the ports of call and took a land tour to a German Village high up in the Andes. I remember a couple of things very clearly; the roads were scarily narrow on the repeating switchbacks up the mountain; the driver seemed to be blissfully unaware that there were no guardrails protecting against what would surely be a fatal plunge over the side; and as a young teenager I thought it was way cool to see the fear in my Mother's eyes as we rounded every turn. The village had been settled by Germans fleeing WW2 and remained pretty authentic to German culture. So, that afternoon, with lots of pork, sauerkraut and other German delicacies, I had a bottle of Polar beer - apparently, to this day, the beer of choice in Venezuela.  I remember the beer tasting great. My parents repeatedly told me this was a "special occasion" and not to think this would be typical. I kind of remember sleeping most of the car ride back to the ship.

Fast forward to my college years in Philadelphia. Without giving away the specific year, I'll tell you that it was during a period when the drinking age had been dropped to 18 in many states - Pennsylvania being one of them. Coors had just starting shipping their beer east of the Rocky Mountains and Miller Lite was running their iconic "Less Filling, Tastes Great" commercials with the likes of Billy Martin and George Steinbrenner staring. Sure, I drank my share of these very commercial beers along with plenty of Gennesee Cream Ale, Schaefer, Schmidts, Pabst and Piels. After all, we were on a college budget and they were widely available. I do, however, remember one of my fraternity brothers coming back from a semester break with a four pack (yes, a four pack) of something very different. Everything about it was new to me. It was bottled (we drank mostly canned beer back then), it had a fancy looking label and it was imported! As odd as that sounds now, it was pretty uncommon back then. This particular beer opened my eyes to the fact that not all beer tasted the same - nor did it look the same. It was brown and opaque instead of pale and transparent. 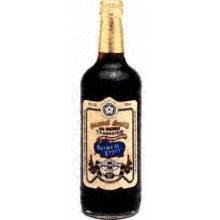 Samuel Smith's Oatmeal Stout remains today, one of my favorite beers. Samuel Smith has been brewing beer in the UK since 1758. They offer a broad range of styles, all good, but in my opinion, none better than their Oatmeal Stout.

Many, many years later, I was finally initiated into a club that you can only be a part of if you find yourself in Manhattan. I was attending a work related event in NYC with my wife and we had a free afternoon. Since we were both from the general area (NJ and CT respectively) we knew our way around Manhattan pretty well - or so we thought. Some friends asked if we wanted to go with them to McSorley's. Huh? Well, turns out that it is the oldest continuously operating saloon in NY. Been there since 1854. It's a hole in the wall on the on 7th Street just east of 3rd Ave. 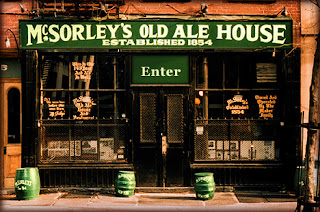 As you can imagine, there is a lot of history to the place. Four of us went and were lucky enough to get a table (this doesn't happen often since there aren't many). But we didn't get just any table. We were seated at what we were told used to be "John Lennon's table". Yes THAT John Lennon used to frequent McSorley's to sit, sip and write lyrics. The waiter (who was born around the time of Noah) pointed out some carvings in the wooden table and swore they were made by JL himself. What about the beer you ask? Well, McSorley's serves one style - Ale. When your waiter asks what you want, the only answer is light or dark - they serve two ales of different color, both brewed specifically for them. It's served in 7 oz. mugs, so order at least two at a time. Somehow, the waiters carry eight mugs per hand and can deliver sixteen to a table on each trip without a tray! The beer isn't memorable, but the experience is.

Last year Cynthia and I went to a beer pairing dinner at a restaurant in our local area. Tuscarora Mill is located in Leesburg, VA and is one of our favorites. Every couple of months they do a special beer dinner event that consists of inviting a craft beer manufacturer to bring 5-6 beers and have the chef pair courses specifically to them. We signed up for the Bell's Brewery dinner, not knowing much about them but really liking what we saw on the advance menu. Since we were just two, we were seated with three other couples that we didn't know but were obviously beer enthusiasts (otherwise why be there, right?). Even before the first course was served, they started asking us if we were there for the Two Hearted Ale. Um, sure, and the other 5 beers being offered. They raved about this particular ale and insisted it was, by consensus, their absolute favorite beer.  Turned out to be a great group of people and we had a lot of fun with them. 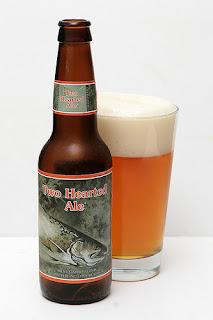 I believe it was the third course (and I honestly don't remember what the food was) but when this beautifully colored, perfectly balanced ale was served, I was converted. Bell's is out of Michigan and fortunately is now being distributed in our area. I try to always have some Two Hearted Ale stashed away in my beer fridge, you know, just in case.

Finally, I am on an IPA kick. For those of you not beer savvy, IPA stands for India Pale Ale. The origin is said to be based on the type of beer that British sailors had on board when they sailed to India because itstood uo to the long journey better than water. There are literally hundreds of IPA being brewed now, some OK, some good, and some great. It is a crisp and bitter(ish) beer with hints of pine and other floral elements. There are single IPAs, Doubles and Triples, mostly distinguished by their alcohol content. A few months ago we were visiting our favorite local beer seller, Cork and Fork, in Gainesville, VA and one or the staff suggested I try Green Flash West Coast IPA. 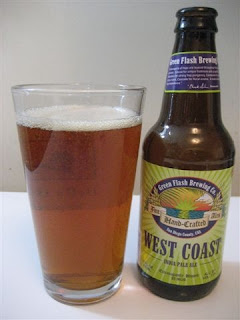 I bought a 22oz. bottle, put it in the beer fridge, and promptly forgot I had it. A few weeks ago I "found" it hiding behind some other bottles and decided it would go well with the spicy vegetarian dish we were having that night. Wow, wow wow! Alert the press. New favorite. Fortunately it seems to be readily available around here so it will now be a part of my reserve stash.

Are these the best 5 beers I've ever had? Probably not. Do they all bring something a little special to the plate, a time, a place, a taste or good or new friends? You bet. The great part is knowing the list will continue to evolve over time.