From Wikipedia: There is much confusion or disagreement about exactly what farro is. Emmer, spelt, and einkorn are called farro in Italy, sometimes (but not always) distinguished as farro medio, farro grande, and farro piccolo, respectively. Regional differences in what is grown locally and eaten as farro, as well as similarities between the three grains, may explain the confusion. Barley and farro may be used interchangeably because of their similar characteristics. Spelt is much more commonly grown in Germany and Switzerland and, though called dinkel there, is eaten and used in much the same way, and might therefore be considered farro. Common wheat may also be prepared and eaten much like farro, in which form it is often referred to as wheatberries.

So, we had farro for dinner last night and, according to the paragraph above, there isn't even a really good definition of what it is! I can tell you though, prepared this way, it was delicious. Cyn put the recipe together and asked that I share it here. 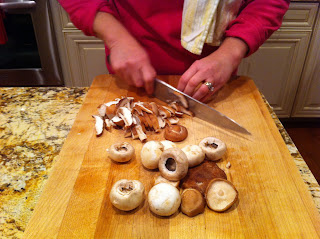 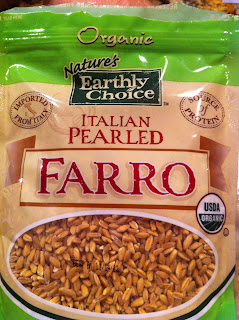 
1. In a braising pan on medium high heat add the olive oil and onion. Stir about 2 mins until soft. Add the mushrooms and farro, cooking 2-3 mins to toast the farro. At this point there should be some noticeable caramelization on the bottom of the pan. 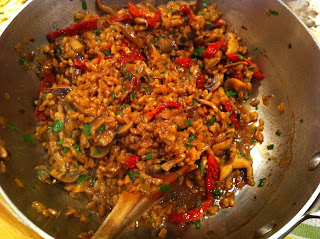 Add the soy sauce and stock. Stir to de-glaze the pan. Bring the mixture to a simmer and cover.


3. Remove from oven and let rest for 10 minutes (this is important!)


As a side dish we made broccoli rabe which was added to a fry pan with slow roasted red onion, fresh garlic, roated garlic and Thai red pepper and a tablespoon of EVOO. Just add the broccoli rabe and a couple of ounces of water, cover and sweat it down until cooked!


The farro had an almost nutty flavor and the cooked consistency reminded me of wild rice. Somehow the flavor profile was both sweet and salty. The dish turned out to be surprisingly filling. 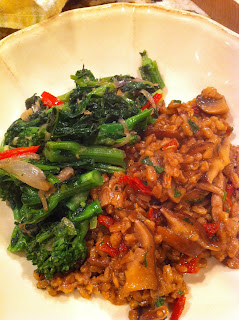 Our beverage of choice for this meal was a Sam Adams offering that I had not seen before. This small batch run of Tasman Red IPA was really good. I found it in a small liquor store when we visited Connecticut over the holidays. Too bad I didn't buy more of it. 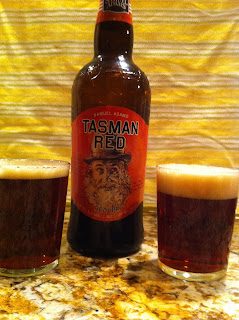 P.S. Check out the new "About Me" and "Favorite Photo" Pages I've added!