The other night, like so many others, we celebrated the end of another year and the beginning of the new one. For me, 2011 was really good and I have every reason to believe that 2012 can be even better. I wish the same for all of you.
There are many ways to celebrate New Year's Eve. Our particular choice, more years than not, is based on a tradition that comes from my wife's family. We stay home, enjoy a variety of food and drink and try to make it to midnight. Some years we do, others we don't.
I've asked Cynthia to guest write the rest of this blog entry since she brought the tradition that we now enjoy together.
I have not always been a ‘good eater.’  But I come by it honestly, my Dad was a white man.  And when I say white man, I mean he liked his food white.
Or in varying shades of beige and brown.  Breast of chicken, mashed potatoes and a piece of Wonder Bread.  That was my Connecticut Yankee Dad’s idea of a great meal before he met and married my Ukrainian and Culinarily Adventurous Mom.   And my Mom and her family tell the story of his re-education with varying shades of honest glee - since they were able to open up his white world and show him a kaleidoscope of herbs and spices.  But the going was slow, and took many years.
During my Dad’s days of food epiphanies, first I, then my brother, made our way into the world.  And dinner became, shall we say, interesting.  Tomatoes?  Not a chance.  Anything with mayo?  Not gonna happen.  Canned tuna, a staple of the time?  Can’t you smell that?  What’s wrong with these people who eat something that smells like that?  (Still can’t get past the lid opening of a can of Chicken of the Sea but bonito canned in olive from Portugal?  Oo la la.  So it was a challenge to feed two pieces of zolotah (Ukrainian translation of ‘gold’, phonetically - which is what our Baba called us grandbabies).
So, how did my Mom enjoy a New Year’s Eve at home with husband and two small children?  She gathered everyone in the living room, set up the coffee table with a smorgasbord of color, flavor and prepared dishes, and to up the ante and keep the kids interested, she let them cook their own food in hot oil on short sticks!  NYE Fondue was born.  Rock on, Mom!
(While this might seem crazy to you parents out there today, remember we also rode our bikes without helmets, walked to school on main roads without an adult holding our hand and played out of doors out of sight for a good part of every day.)
As dangerous and glamorous as it seemed to my brother and I at the time, we each had a parent providing their undivided attention to the cooking process.  And we ate everything - a feat heretofore unheard of in our household.  Perhaps the spirit of adventure was captured when moving the food away from the kitchen table and onto the coffee table, with pillows as chairs and hot spears as utensils.  I highly recommend an adventure to get a picky kid to try something new --- pair it with something that could put a kids' eye out and you can't fail.
And so a tradition was born.  Every New Year’s Eve, when we’re feeling like staying home, we revisit the Fondue.  More often than not, we feel like staying home just to have A Fondue.  Here are the basics, for anyone interested in adopting a tradition:
Buy some shrimp and enjoy a spicy shrimp cocktail whilst you cut, stir and assemble.  A martini can only magnify the celebratory feeling, so grab your favorite gin or vodka and create.  My current favorite is Belvedere and I like 'em dirty, using a French vermouth to clean the dust out of the glass and pouring the excess down the drain.  Extra olives and a spear of cucumber tipped with Szechuan pepper salt rounded out my cocktail of choice.  Al went with a beer tasting - I wasn't willing to trade the food space in my stomach for brewskis. 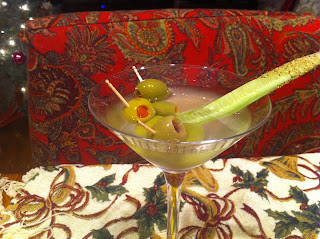 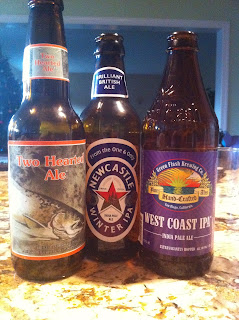 You must have a pot and a stand especially for fondue, unless you’d like to gather ‘round the stove.  I highly recommend an electric fondue pot and ours is from Cuisinart.  With a traditional fondue pot, moving back and forth between the stove and the stand and its can of Sterno, is something you’ll have to do to keep the temperature steady.
Essentials for the fondue include bite sizes pieces of beef, breaded chicken and twice breaded cubes of cheese, typically mozzarella and munster.  Any oil with a decent smoke point, canola, peanut, even regular old vegetable oil, will work well.  I prefer peanut oil, but only because that was the oil we used.
There MUST BE dipping sauces for the meat and dips for the crudites.  At least three dipping sauces for the beef, chicken and cheese coming out of the hot oil - something sweet, something tangy and something gloppy.  This past Fondue, it was A-1 steak sauce (a must have since I was old enough to taste it, not because I adore it, because like Fondue, it’s tradition), a thick hickory honey BBQ sauce, and a sweet and hot Thai chili sauce.  A platter of fresh vegetables always accompanies the Fondue, since everyone knows they cancel out the fat calories.  Dips this year were a fresh cayenne laced spinach dip and a homemade bleu cheese - they adorned baby radish, carrots, blanched and shocked broccoli, red, orange and yellow peppers and persian cucumbers with a Szechuan peppercorn salt. 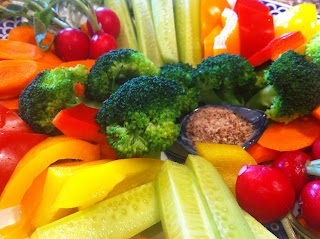 And because you can never have too much spice in our house, a Kajun Krab dip/spread from our local grocery that my good friend and fellow foodie Suzanne turned me on to.  It’s wonderful on a buttery cracker, kind of like a cold spicy crab cake in a bite. Kind of. 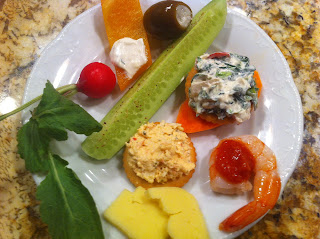 Other munchies included lemongrass chicken stix from Trader Joe’s and two last minute, made up on the spot, crostini.  (I love challenging myself to come up with something interesting and tasty from stuff I have on hand.)   Giant white beans that had been marinated in a sort of Italian dressing hit a crostino with a topping of julienned Peppadew and Al’s balsamic dressing.  Baby artichokes got a quick chop and mix with a  little minced shallot, mayo and pecorino romano, then a quick broil to brown.  Both were easy, fast and delicious. 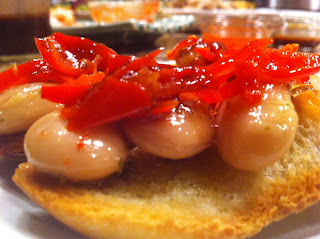 Nice chunks of aged cheddar and a good pepperoni rounded out the snackfest.  Typically we’d have some summer sausage or good salami and a few more cheeses, but it was just the two of us this year.


I know it sounds like a lot of food, but we think of it as a tasting menu and we do pace ourselves.  And there are always leftovers which make a New Years Day lunch a snap.  Enjoy!