This year for Christmas, Cynthia and I gave each other a gift that will last all year. We "promised" that on the first Saturday of each month we would go out to eat at a place we had never been before. It's not that we don't eat out, but like a lot of people, we have our favorite places and tend to frequent them. This gift will make us work a little harder at finding new, and hopefully, interesting spots. Based on our experience last night, we're off to a good start.

Mokomandy (apparently for Modern Korean by Mandy) is an interesting creation that, as their website says, "is a casual fine-dining restaurant based upon the marriage of a Cajun woman to a Korean-American man". The food is clearly the product of both cultures but isn't, in any way, an attempt to create a fusion of the two.

The first impression was good, we were greeted warmly and our reservation got us seated right away. The atmosphere is fun, family friendly and a bit loud. If you're looking for intimacy, this might not be the best choice.The mixed drink and beer menu is great. They offer quite a few, out of the mainstream choices in both categories. They also have a nice selection of wine.

The menu was designed in a way to promote "grazing". They offered snack sized portions as well as small, medium and large plates. As advertized, there was representation from both Korean and Cajun cultures. We decided to order several things and share them to try and experience a lot of different tastes.

We started out with one of the snacks - probably because neither one of us could quite figure out what it was. Fava "nuts" turned out to be fava beans roasted to a crispy perfection and seasoned with cajun spices. Cynthia thought the spices were reminiscent of a charged up Old Bay. What a revelation, these things should be outlawed! It's a good thing the plate was snack size because we would have eaten them until we exploded had there been more. 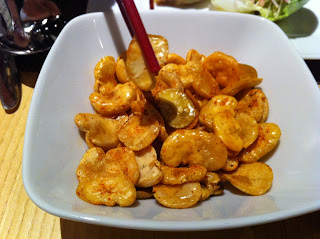 We ordered two small plates, one from each culture. The seafood gumbo was true to New Orleans and contained oysters, shrimp, catfish, trinity (a mix of bell pepper, onion and celery) and rice, all complemented by a dark roux. 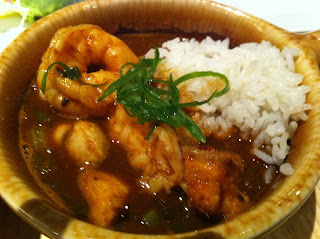 From Korea came foie gras dumplings. The perfectly steamed dumplings contained braised duck and were topped with a beautifully seared piece of foie. These were complemented by a small salad of radish, onion and spouts and a house made plum sauce. 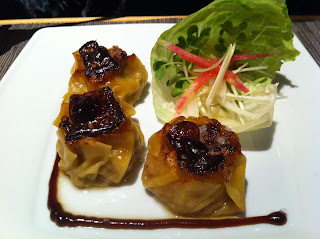 Next came two medium plates which served as our main courses. The Cajun offering was a shrimp etoufee. If you like the essence of shrimp, you would love this dish. The perfectly cooked shrimp are complemented by rice, trinity, butter and a house made spice blend. Accenting the dish were crispy shrimp chips which added texture. 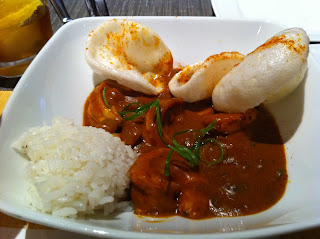 The Korean classic bulgogi beef was as good as I've had it anywhere. It was served with laver (sheets of pressed seaweed to make rolls if you so desire), purple rice, white rice, black garlic, banchan (Korean for small dishes, in this case spicy kimchi and yellow squash skitakii). The bites we were able to put together combining the beef and other elements on the plate were perfect. The intense beef flavor combined with the spicy yet refreshing kimchi and the subtle squash and skitakii married perfectly together. 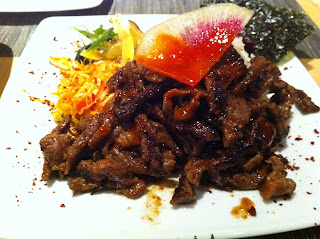 We were pleasantly sated at this point but decided to split a dessert. What's more classic in the Cajun culture than beignets? Nothing - so we ordered them. Obviously house made, they were served piping hot with four sauces and the requisite powdered sugar. If we had never had them freshly made at Cafe Du Monde in New Orleans, we would have been impressed.

All in all, a really wonderful experience. Mokomandy is nearly an hour from our house. If it were closer I could imagine it becoming our "go to" spot. There are still a lot of things we want to try on the menu - and we will definitely be back.