I'm originally from Trenton, NJ. I don't say I grew up there because I run the risk of being reminded that I haven't quite grown up yet, but that's another story and not at all the subject of this post.

Trenton is the state Capital but has always suffered by being somewhat equidistant from New York and Philadelphia. It's not famous for very many things. There's the "Trenton Makes, The World Takes" bridge 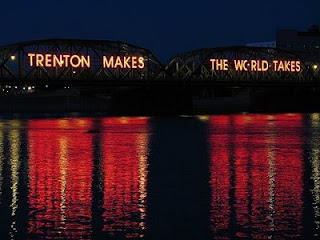 spanning the Delaware River. That catchy slogan refers to the fact that Trenton, in it's heyday, was a highly industrialized center of manufacturing specializing in pottery, suspension bridges, iron, steel and rubber products, mostly, those days are gone.

There was the Battle of Trenton on December 26, 1776, where George Washington crossed the Delaware river from Pennsylvania to surprise and defeat the Hessians. This was Washington's first victory and may have been the turning point of the Revolutionary War. Trenton was even briefly the Capital of the the United States, in November and December of 1884. It was considered as a possible permanent Capital until the southern states insisted on a location south of the Mason-Dixon line.

There are even a few people you've heard of that call Trenton their home town.

But for me, there are three things that make Trenton memorable; tomato pie, pork roll and oyster crackers. Yup, it's all about the food. These three foods are indelibly tied to my childhood in Trenton and conjure up strong and pleasant memories more than a half century later.

Trenton Tomato Pie, is as local a term for a food variant as you'll find anywhere. It's what people in Trenton call their pizza, and for the most part, it is pizza, with one very significant difference. Tomato Pie construction demands that the sauce goes on last. That's right, the order of construction is dough, cheese, toppings (if desired) then, and only then is the sauce spread on top before  going into the oven. The result is a much more intense tomato experience than a pizza where the sauce is under the cheese and toppings. Oh, did I mention it is always, always, always a thin and crispy crust? None of this deep dish stuff in Trenton.

I remember going off to college in Philadelphia, a mere 35 miles away, and going into various pizza joints asking for "tomato pie". They looked at me like I was from Mars. It was that specific to Trenton. Better? For me, yes, but I was weened on it. DeLorenzo's has been serving authentic Tomato Pie in Trenton since 1947. If you're ever anywhere near, go to DeLorenzo's. This is one of their's. 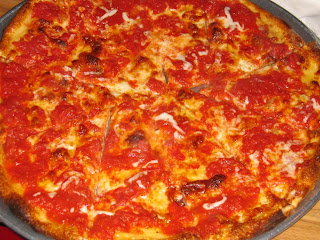 The second, and probably most misunderstood food, that brings me right back to my childhood is Pork Roll. Also known as Taylor Ham, it is a breakfast meat whose roots go back in Trenton to at least the middle 1800s and possibly to the Revolution. The product, as it is sold today, was developed by John Taylor of Trenton, NJ in 1856. Compared by some to Spam, mild salami, summer sausage and even bologna, it is, in my estimation, like none of these. It has an intense "haminess", is naturally salty and is one of the true tastes of my youth. It is something almost every kid in Trenton sees on his breakfast plate very early in life. The "roll" part of the name comes from the shape the product was typically sold in.

There are other minor manufacturers of similar products, most noteworthy Case's, but if you're from Trenton, pork roll = Taylor Ham. A classic breakfast sandwich of the region is Taylor ham, fried egg and cheese on a hard roll. The sliced meat is usually cooked on a griddle or in a frying pan until slightly crispy. I can tell you that you don't have to travel very far from Trenton to get that "what are you talking about?" look when you ask for Taylor ham. Today, it is available in a somewhat wider region, even here in our local Wegmans in Northern Virginia where it is sold in both the original roll form and in 4 and 8 pre-sliced packages. 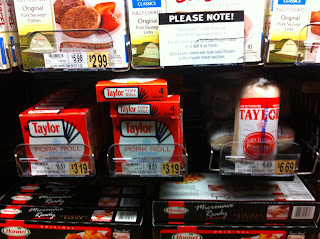 I should note that my wife, who has a wonderfully developed sense of adventure when it comes to food, won't get anywhere near it. No problem, more for me.
Lastly, and another Trenton original, are oyster crackers. Yes, those little pillows of crispiness that we add to soup these days were originally made in Trenton by the Old Trenton Cracker Company (O.T.C.). Here is a great history of the O.T.C. company. It details the birth of the company in 1847 in Trenton by an English immigrant named Adam Exton.
I can remember being given these in their original form (like the ones pictured below) as a snack very early in life. They were crisp, crumbly and exceedingly dry but somehow I loved them. They are still available today in the original form in some supermarkets. 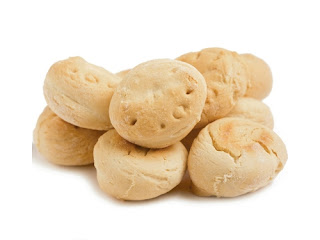 We all have special food memories from when we were kids. These are some of mine. What are yours?
By A Reluctant Foodee at February 12, 2012