One of the many perks of being married to my beautiful and talented wife is her ability to produce a restaurant quality meal at home. So, when she told me I could have anything I wanted for Valentine's Day dinner, I quickly asked for for the Spicy Pork Tenderloin she had made several times in the past. The recipe is based on one from the Gourmet Cookbook, one of Cyn's favorite cookbooks that complies many of the best recipes from Gourmet Magazine.

I love pork, in fact, I love almost anything from the pig (OK, maybe not scrapple). For me, it's more than just "the other white meat". It is a perfect canvas for a wide variety of dishes that run the gamut from subtle to in your face . This one is clearly in the latter camp. Here is her version of the recipe. 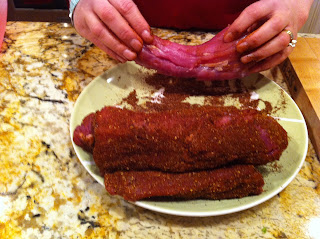 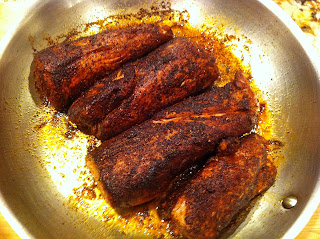 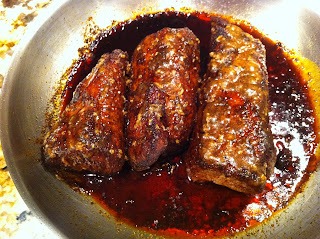 Slice the pork to desired thickness and serve with juices from the skillet spooned over the meat. Hint: Don't ignore the "pork candy" that has formed on the bottom of the skillet. The combination of spices, pork juices and brown sugar make a taffy like substance that I'm thinking of patenting and marketing.


Cyn served this perfectly medium rare and fork tender delight over a bed of creamy polenta and with mustard green that had been quickly blanched in boiling water, chilled in an ice bath to retard the cooking and then sauteed with sliced fresh garlic until (mostly) tender. Any restaurant chef would be proud to serve this finished plate. 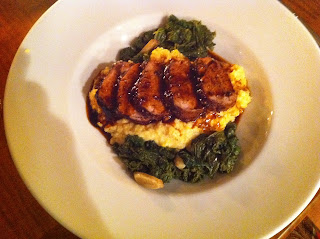