So, it was the first Saturday of the month already and we needed to pick a restaurant from the Top 50 in Northern Virginia list. Originally, we had settled on a restaurant in bucolic Clifton, VA called Trummer's on Main, but after looking at their most recent online menu we felt uninspired and went back to the drawing board. Cyn did the research while I shivered in the arctic temperatures of Amsterdam. Her suggestion? A restaurant called Tallula in Arlington, VA, much closer to Washington, DC. I think it was the gnudi that got her. More about that later. 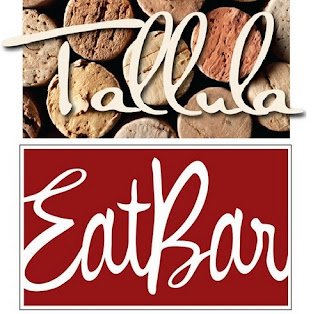 Tallula turned out to be a rather discreet atmosphere, almost club-like, with lots of wood and low lighting. I liked the feel as soon as I walked in. Since we both had appetizers, mains and desserts, I thought it might be fun to alternatively record our thoughts on each course.

I settled on a roasted sweet potato soup with whipped goat cheese, chorizo oil and pumpernickel croutons for my first course. Since I like my hot soups hot, I was disappointed that it was served kind of lukewarm. I'm not sure if this was the chef's intention or not, but I would have preferred it hotter. The soup had a clean sweet potato taste and was silky smooth. The whipped goat cheese was a nice touch but the chorizo oil was lost on me. I could see it, but I didn't really taste it. The pumpernickel bits were very nice, adding a little texture to the soup. All in all, good, but somewhat under seasoned and missing some element that I haven't yet been able to figure out.

Seared beef carpaccio, with quail egg, crispy parsnips and a smoky shallot dressing was my choice of starter. Beautiful presentation, a circle of thinly sliced beef rounds were under a mound of arugula and crispy 'snip strips, a personal favorite, with a quartered hard boiled quail egg nesting in the greens as well. The smoky shallot concoction was hidden under the arugula in the center of the round o'beef. It certainly pleasing to the eye and each individual ingredient well prepared, but the arugula and vinaigrette were palette killers when paired with the subtle beef and quail egg. There was simply too much of both for the beef to support. Arugula and the dressing were nice together. I think I may have mentioned the dressing as a 'remoulade gone rogue' at the time.

For my main course I picked the porcini ravioli of chestnut and cabbage, with mushrooms, sweet potatoes and Fontana cream. All of the pasta dishes were offered in smaller and full size portions, a nice touch I wish more restaurants would follow. I chose the smaller portion anticipating that I would want the cheese course for dessert. Turns out, I made a good decision. The "smaller" portion was actually quite generous and, due to the components, rich and filling. While the first course was a bit of a disappointment, this one made up for it. The ravioli were clearly house made, the dough having been blended with porcini, making it a medium brown color, and the chestnut and cabbage filling was savory with a little unexpected sweetness. The mushrooms and sweet potatoes added to the dish without distracting from the ravioli and the fontina cream sauce was flavorful but light on what was an already hearty dish.

As an official Short Rib Slut, I couldn't resist the spinach and ricotta gnudi with Yukon Gold potato, braised beef short rib and mustard greens. And I would like to say right up front that I enjoyed this dish, but would love to hear what the chef intended, as I didn't 'get' it. In my mind, I pictured pillowy clouds of gnudi on a bed of short rib and gravy with a nice hit of mustard green to cut all the richness, and hey, if they wanted to add potato, who I am to complain? What arrived was a pillow of pureed potato topped with the aforeimagined (yes, I know it's not a word) short ribs and their glistening juices, slightly chewy pan fried gnudi atop that, and fried mustard green shards over all. Thank goodness I was prescient enough to order the half portion! While each component was delicious, the heavy on heavy on heavy could have benefited from a slight tweaking of the ingredients, for my taste. If you must have a base, do something interesting like turnip, carrot or parsnip- and for goodness sake, I'm all into fried greens as much as the next person, but not on uber rich unless you're superman and can make the oil clinging to the greens a non issue.

I think my discontent may stem from the kitchen re-heating each component, and not actually cooking anything for me. Not a sin, of course it happens all the time, and I do like a meal to move along. Did I mention we were through three courses and were back out the door in a little over an hour?

One of my favorite surprises is when I find a restaurant offers a cheese course. For me, I find this much more satisfying after a meal than a sweet dessert. Tallula offered a nicely thought out cheese and house made charcuterie selection. From their selection of six, I ordered two goat's milk cheeses (cave aged Cardona from Wisconsin and a Cherry Glen Ash from Maryland (one of my very favorite cheeses), and a beautiful cow's milk Jasper Hill Bayley Hazen Blue from Vermont. Again, the portions were very generous and they were served with a port fig compote and crostini which were a bit over toasted.

Anytime there's a plate or platter of multiple items for tasting on a menu, I'm your gal. For dessert I decided to tackle the Cookies and Confections - cashew snickers, hostess cupcake, cheesecake brownie, mint chip ice cream and oatmeal cream pie, in mini portions. I would go back to this restaurant just to eat that cashew snickers and the peanut butter ice cream they substituted for the mint chip for me (bad schnaps experience in college still prevents me from enjoying some mint flavors....). Hostess cupcake- dry and forgettable. Cheesecake brownie - kind of forgettable as well. The oatmeal cookies were very, very good, but the cream in between was all but MIA and added little, if anything to the party.

For me, after a slow start, Tallula was a mostly redeemed itself with several nice and unexpected touches and good value for what they served. Was it a Northern Virginia Top 50. I guess, because it said so in the magazine.

I realize I'm pretty hard on restaurants. Especially ones that have such a lovely menu and build my expectations. While I enjoyed my meal, rather than go back to Talullah, I'm up for visiting the attached Eat Bar and sampling that simple and clean, but elevated menu. The kitchen at T is doing some lovely things, but I think they're getting in their own way to fussy things up when they shouldn't.