When I realized that I was going to be in Amsterdam on a Monday, I immediately started to wonder what the challenges of staying meatless might be. For those of you that travel, I'm sure you know that meals can often be scripted, restaurants can be chosen for you and food options can sometimes be limited. Now don't get me wrong, Amsterdam is a completely cosmopolitan city with a very broad and exciting food scene. I just didn't know in advance where I would be eating my three Monday meals.

Breakfast was easy. I ate at the hotel buffet and able to stick with fresh fruit, cereal and yogurt. OK, I admit there might have been some aged Gouda cheese that migrated onto my plate. I'm in Amsterdam after all. Have to eat the Gouda while over here.

Lunch was during a scheduled meeting, brought in by the meeting organizer. I had called ahead to one of my European colleagues and mentioned I was not eating meat on Monday's and after explaining that no, I wasn't a vegetarian, he told me that he would see what the caterer could do. But that was more that a month ago, so the day of the meeting I was entirely pleased to see a beautiful dish of pasta with steamed vegetables brought in for me - just me. The sandwiches and other food looked good too, but I did get a few looks that might have bordered on jealousy from some of the other meeting attendees. Thanks for taking care of me Mike! 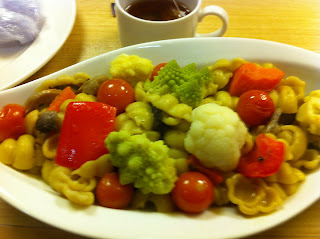 On to dinner. I was fortunate to be invited to join a group at a wonderful restaurant called De Kersentuin. The name translates to The Cherry Orchard and the restaurant is located in the Bilderberg Hotel. Turned out I was in for a real treat.

Soon after being seated our group was treated to an amuse-bouche plate with three offerings. The first was a tall shot glass of pumpkin soup with a Parmesean cheese foam. Second was a perfectly savory mushroom panna cotta topped with chopped pine nuts. The third little bit was a satiny smooth parsnip puree with a small piece of crispy potato. All three were delicious and I promise you this picture, and the ones to follow, do not do the food justice. 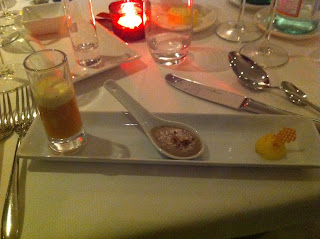 To my pleasant surprise there were appetizers, soups and main courses available that were meatless - and not just available, but,as it turned out, wonderfully prepared and presented.

Following the generous amuse-bouche, I felt I didn't need an appetizer, so i moved right to the soup. My choice was a cream of parsnip with roasted walnuts and a "cloud" of rorippa (I admit I had to look this one up). I didn't lick the bowl(mostly because my boss was sitting directly across from me) but I wanted to. It was that good. 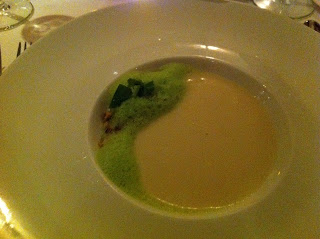 The meatless main choice on the menu that evening was a porcini risotto. It was beautifully plated with a fried egg, grilled bolets, beetroot, smoked celeriac, marinated spring onion and a cream of caramelized onion with a frothy sauce of Parmasean cheese. Quite the mouthful both figuratively and literally! 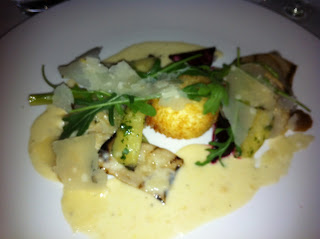 Those of you that follow along know I'm not big on desserts. But when someone says "cheese course", I'm all in. And then someone said cheese course. The chef picked out four beautiful locally made cheeses for us to sample. Unfortunately, at this point I was a bit overwhelmed and didn't pay close enough attention to the presentation to get the names. I did manage to snap this picture. 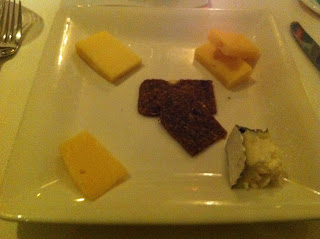 Lastly, my companions on both sides of me were kind enough to let me take pictures of their main courses. They were both worth noting and I'll share them here.

The roasted leg of venison was served with turnip with cinnamon, cream of quince, fondant potato and a Jamaican pepper sauce. 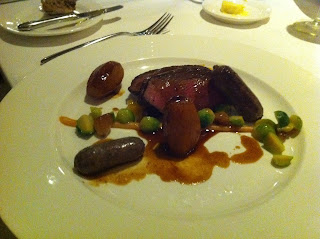 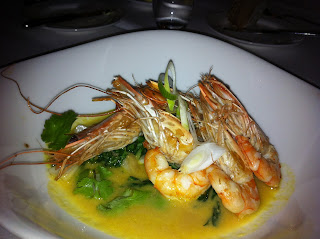 Thanks for sharing Johanne and Jay.

All I can add is that you are in Amsterdam and want a memorable meal, check out De Kersentuin.
By A Reluctant Foodee at February 02, 2012