A while back I wrote a post about using the preserved tomato sauce from 2008 that we still had in our pantry. It was the last jar of what was the best tomato crop we have grown -- to date. This weekend we picked and roasted the first batch from this year's garden with high hopes that we could match the richness of flavor from that magical year.

I wanted to share the process, especially since it's so simple, at least up to the canning, which I won't cover here. Those of you that can know it's not really hard, just a little time consuming.

The first step is pretty obvious, get yourself some tomatoes. We like to grow our own, but you can also buy them from a farm or farm market. Here's a little tip if you decide to buy -- offer to buy the "seconds", you know, the less than perfect tomatoes that everyone else has passed on. They can have blemishes, partial spoilage and even the occasionally bug hole. Don't worry, you're going to cut away any bad parts and you'll be surprised how little waste there is. Most farmers will be happy to sell you these orphans at a reduced price. Don't be afraid to haggle! Later in the season we'll do exactly that after our plants have exhausted their yield.

For now though, we are happily picking beautiful fruit from our plants. Here's what we got this weekend. 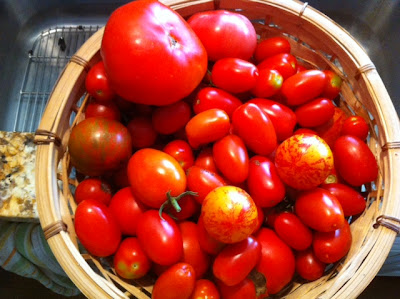 As you can see we like o grow a pretty wide variety of tomatoes. This year we planted the following varieties: Tigerella, Juliette, Sausage, White Cherry, Sungold, Boxcar Willie, Legend, Hawaiian Pineapple, Green Zebra, Black Zebra, Tommy Toe, Brandywine Red and Viva Italia. Not all came ripe at the same time but many are in this batch.

First, give them a light rinse to remove any remaining soil. You'll need a good sharp paring knife and a sturdy, oven safe roasting pan with high sides, the kind you might cook your Thanksgiving turkey in (no, not one of those cheap foil one's you buy in a supermarket, this is going to get heavy). Cut the tomatoes in chunks. I know that's a technical term but I'm sure you'll figure it out. The point is that the relative size isn't that important. You can even leave the cherry tomatoes whole. Fill the roasting pan almost to the top if you have enough tomatoes. Don't worry, they'll cook down in size as they release their liquid and some of it boils off. Add multiple (another technical term) cloves of whole garlic. The amount is really "to taste" so you may need to experiment some. We like a lot and fortunately we just harvested our garlic from the garden a few weeks ago. 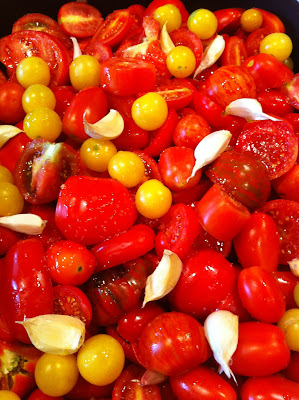 Add a liberal amount of extra virgin olive oil (1/4 - 1/2 cup) to the pan, stirring just enough to get things coated. Add salt (about 1 tsp Kosher salt per quart of tomatoes). Put the pan into a 425 degree oven and walk away -- at least for while. The tomatoes on top will eventually start to brown. This is a good time to open the oven just long enough to stir the mixture up bring new tomatoes to the top. Repeat this process every time the tomatoes on top brown. How do I know when they're done you ask? Well, it's a little bit of a feel thing but what we look for is that the water to pulp ratio is about even and all the tomatoes are "broken down." All the skins will be loose and mostly separated from the meat.

Remove the pan from the oven and move to somewhere safe, we use the stove top. Warning, warning, warning! At this point, the mixture is pretty loose and at pretty much the temperature of lava. Make sure the kids and pets are out of the way. Allow to cool to room temperature. 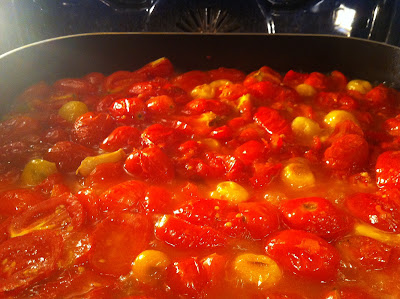 You'll need a way to remove the skins and seeds and convert this beautiful mixture into a silky smooth sauce. We use a hard food mill we bought from Williams Sonoma years ago. It's a little bit of work put wonderfully gratifying to do. The food mill grinds the tomato meat, passes the liquid and removes the skins which are then discarded. 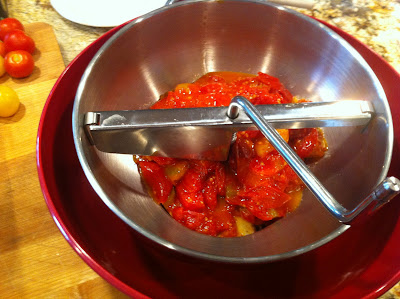 The sauce is now ready to be used as is, "doctored" into a variety of other tomato based creations, canned for future use or even frozen! The roasted garlic flavor will be there no matter which of the methods you pick and no matter how long you store the canned or frozen sauce. 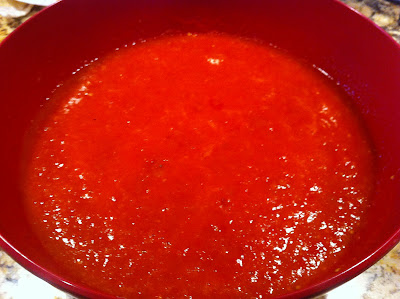 I've said it before but it bears repeating, there is nothing better than opening a jar of this magic in the middle of winter and getting that garden fresh taste.

Four Seasons Food hosted by Delicieux and Chezfoti
By A Reluctant Foodee at July 16, 2012