It's been more than 2 weeks since I posted anything and I'm feeling a little guilty about it. If it matters, I do have an excuse -- I've just returned from a 9 day trip to Ireland! It was part holiday and part business, both of which went well. Cynthia was with me and we thoroughly enjoyed the people, the golf, the culture, the scenery and the beer. 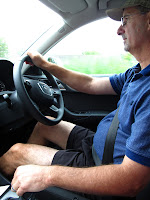 During our visit we managed to rent a car and drive to two of our three rounds of golf. For those of you who have never driven on the "wrong side of the road", it's not as intimidating as it sounds. After about 15 minutes it seemed pretty natural. I should mention that the vehicle we rented was a standard transmission so shifting with the left hand added a little spice to the equation.  Some of the roads are pretty narrow, more like a lane and a half than two but there seems to be way more courtesy on Irish roads than in the US, so things have a way of working themselves out. 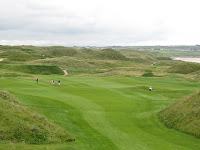 For those of you that might be golfers, two of the courses we played are pretty famous, and now having played them, I understand why. Ballybunion was first opened in 1893 and consistently ranks in the top 100 courses in the world. Perched on the cliffs overlooking the ocean, it's a typical links style course that offers amazing views and a real challenge to golfers of any skill level. We caught it on a rather benign day, no rain, modest winds, and with the help of our caddy Lez, had great time playing with two Irish Catholic priests who were visiting from Dublin. Maybe we got the good weather thanks to Father Enda and Father John. 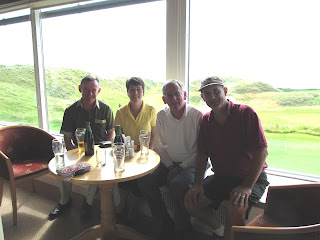 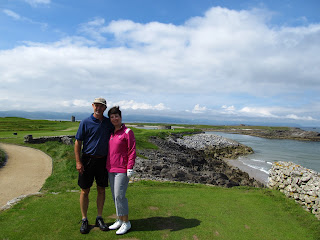 The next day, another one without rain until the front edge of a storm rolled in as we were playing the last hole, we played Tralee, an Arnold Palmer course built in 1984. Most golfers have heard Palmer's famous quote, "Yes, I designed the front nine, but God clearly designed the back nine.". Hyperbole right? No, understatement! Numbers 10-18 at Tralee are, by far, the most dramatic, breathtaking and challenging holes of golf I've ever played. Once again, perched on the cliffs of southwestern Ireland, overlooking the ocean, I felt like I was on a computer graphically generated version of a golf video game. Huge elevation changes, forced carries, blind approaches and views that I would gladly pay to go back and see again made it truly memorable. I'll admit I was a little bit jealous of our caddy Tommy, since this glorious place was his office.

Our final round in Ireland was at the Killeen course at the Killarney Golf and Fishing Club. This course was the site of the 2010 and 2011 Irish Open and came highly recommended. However, that part of Ireland has had the wettest spring/summer in recent memory and the condition of the course has suffered from it. We got rained on for 6 of the 18 holes and left not particularly enjoying the layout. To be fair, it would have been hard for any course to follow Ballybunion and Tralee.

On to the food!

What we learned in our 9 days was that what the Irish do, they do very well. The ingredients are amazingly fresh and local, the food is prepared excellently and it is always brought to the table piping hot (this may seem a small thing but for me, it's not). Meats tend to be beef, lamb and chicken. Seafood is everywhere (it is an island after all) and super fresh. Vegetables are often an afterthought, except for the potatoes. If you go to Ireland, prepare to get your potato fix. They are a part of every traditional Irish breakfast and are served with basically every other meal of the day. One day, in a pub, Cynthia ordered Potato Cakes as her main dish. They were made by taking mashed potatoes, adding smoked chicken and a few pieces of vegetable then forming a cake which was then sauteed and covered in a mushroom gravy. Delicious actually. It arrived on a plate with a small green salad and a large portion of beautiful fries! That's right, potatoes with potatoes. 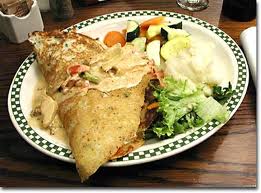 I did have one traditional potato dish that was new to me -- boxty. On my Meatless Monday in Ireland, I was in a restaurant with a group of work colleagues and their spouses. The set menu offered choices of beef, lamb, fish and pork. The staff had been told in advance that one vegetarian meal would be required and they came through beautifully serving me a traditional vegetable boxty. Basically, boxty is a mixture of finely grated raw potato, mashed potato, flour baking soda and egg.the mixture is fried in a griddle pan for a few minutes on each side, forming a thin "pancake" which is plated, filled with anything that you like and folded over in half creating a kind of unsealed calzone. In my case in was a mix of chopped vegetables in a thickened sauce. Very tasty.


In my opinion, the Irish do fish and chips better than the English. It is always amazingly fresh, fried to perfection and served right out of the fryer. The chips are thick cut, crispy on the outside and creamy on the inside and snap when you bite them. Also worth mentioning is the tea. As a tea drinker (I don't so coffee) I was happy to find a country full of tea drinkers who served a good black tea that they steeped quite long making it full and strong.Everything we had baked, breads, scones in the morning, even the toast served every morning with breakfast, was wonderful. The Irish swear it's because their dairy products are different from ours. Read different as better. I can attest to the fact that Irish butter is way better than anything you find in your local supermarket.

Interestingly, the very best meal we had in Ireland was at a traditional Italian restaurant -- Cucina Italiano, in Killarney town. We stumbled in one evening while walking around town trying to decide what to eat. I'd recommend anyone who is in Killarney to set aside on evening for a meal at this place. After the fact, we saw many people referring to this as the best Italian restaurant in Ireland on the internet.We also had a very good meal at the Lime Tree restaurant in Kenmare, a beautiful town known for having some of the best food in Ireland.

All in, we had a wonderful first trip to Ireland and look forward to returning some day.
By A Reluctant Foodee at July 14, 2012