...well, you might want to consider the dish we had this week on Meatless Monday.

One of the second tier goals of committing to a full year of Meatless Mondays was for me to expand my horizons, particularly as they relate to vegetables. Don't get me wrong, I'm not really a picky eater. In fact, having worked for the Japanese for more than a decade and traveling to Japan frequently, I know that I have experienced my share of, shall we say, non-traditional fare.

In the vegetable world, there are stars, there are bit players and then there are those that are misunderstood. I'm thinking that okra is in that last category. I suspect most people think of it as a "southern vegetable", and it isn't popular in large areas of the country. I never saw it growing up in NJ and, now that I live in VA, I'm not sure it's any more popular here. Sure, I've had okra here and there over the years, in Cajun dishes mostly. I've also had it battered and deep fried. Quite tasty that way - but then again what isn't tasty when it's battered and deep fried?

So, in that spirit of expanded horizons, I mentioned to Cynthia that I read about an okra and chickpea stew online and asked her if she was up for making it. Silly question really, she never shirks from a food challenge. So, this Monday night we had what turned out to be a soul satisfying, yummy, and very healthy dish that, as usual, was even better when I ate the leftovers for lunch the next day.

Here is the recipe she put together. 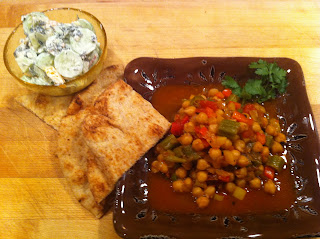 We served it with whole grain na'an bread and a side dish made up of the leftover spinach dip from New Years Eve that we added chopped cucumber to. The coolness of the salad was a perfect offset to the spicy main dish.


IPA from one of my favorite brewers, New Belgium, completed the meal. 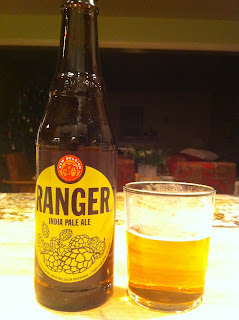