Thanksgiving Dinner: It's all about the sides....

I actually love turkey. I particularly enjoy a fresh turkey sandwich on a crunchy ciabatta roll in the evening following Thanksgiving dinner. I do however, realize that turkey is basically a blank canvas that needs a strong supporting cast. That's why at our house on Thanksgiving, it's all about the sides. This year, there were eleven. 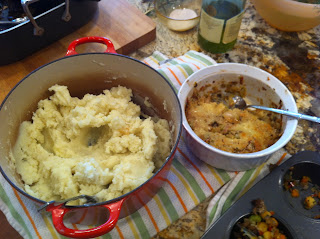 Some were pretty traditional like mashed potatoes, corn and my own guilty pleasure, Ocean Spray Cranberry Sauce. You know, that sweet jellied can shaped slab that your grandmother served. Cynthia won't go near it - I think it's the greatest stuff since sliced bread. Oh, those other things are pickled beets - not my favorite. 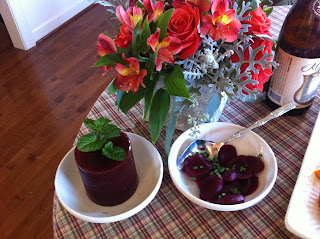 Then there were the vegetables, lots of them. 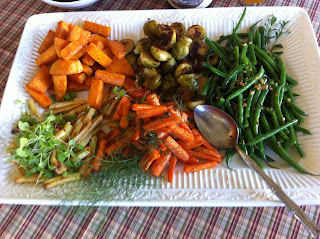 The oven baked sweet potatoes had just a hint of cayenne, dried chipotle, maple sugar and Vietnamese cinnamon (who knew?) to kick them up a notch. Wait, no one says that, right? The brussel sprouts were cooked with a little crispy bacon and some apple cider vinegar to brighten them up a bit. I'm pretty amazed to admit that I'm starting to like brussel sprouts. Go figure. The green beans were lightly steamed and then finished in a fry pan with brown butter, winter savory and green (immature) garlic pulled up from our garden this morning. 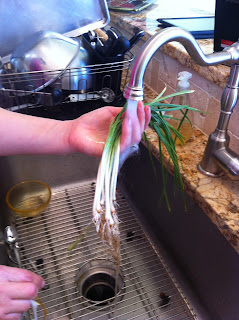 The carrots and parsnip were both oven roasted in EVOO and sea salt. The carrots were topped with bronze fennel tops and the parsnips with purple top turnip micro greens straight from our cold frame. 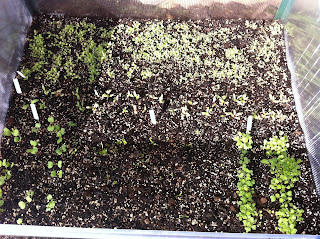 What's Thanksgiving without stuffing you say? Well we had stuffing made from red pepper, mushrooms, butternut squash, onion, parsley, sage, rosemary, carrots, celery, turkey stock, spicy sausage, bread and chestnuts. The stuffing was oven baked to get all those little crisy edges that make it so good. 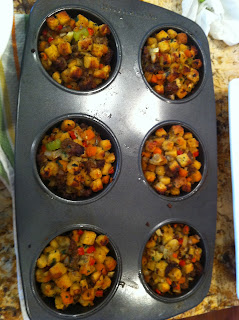 That's ten, right? Number eleven was one of my favorites. It was a scalloped leek, shallot and onion casserole topped with bread crumbs and extra sharp aged chedder. It's up there a few pictures back next to the mashed potatoes.

Tried a couple of new beers to top everything off. The Chatoe Rouge is an Oregon beer in the style of a black lager. Interesting. Somewhere between a typical lager and a stout. Good- not great. The other was from one of my favorite brewers, Dogfish Head in Delaware. This particular style was made in a small batch and was purported to be a continuously hopped imperial pilsner. Wow, never expected to hear that string of words together. My Antonia was actually very nice and worked well with all the rich foods. Hoppy, not like an ale, but still good. 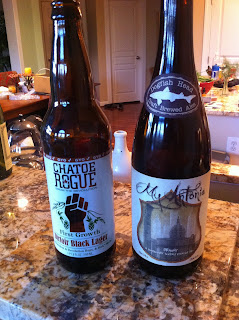 Aren't you glad I didn't bore you with another perfectly roasted turkey picture?
By A Reluctant Foodee at November 24, 2011