Monday night out and about

So, it turns out the restaurant is called Villa Mozart, not Cafe Mozart as I wrote yesterday. It also turns out that it's a great little restaurant. Good food, very reasonable prices and an atmosphere that said "we know what we're doing and don't need to be pretentious about it".

Since it was Monday, my selections were limited to meatless selections - and my dinner companions didn't let me forget it as they ordered the likes of a beautifully prepared carpaccio and a calamari appetizer that everyone raved about. Another appetizer that we shared was simply called Fungi, but to say it was "just mushrooms" wouldn't be fair. Here is how if is described on the menu -  Soft yellow polenta soufflé, Oregon wild mushrooms, truffled fontina cheese fagottino. This I tried - this I would go back for.

I stuck with an arugula salad which had generous shavings of Grana Padano cheese and dressed simply with EVOO and balsamic. Interestingly, it was served with what they described as a mushroom tart. Seemed more like a mushroom egg custard to me, but what the hell, it was tasty. 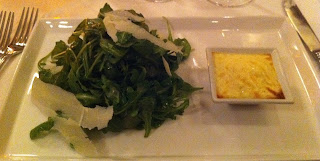 For my main, I opted for a rye pasta ravioli stuffed with mountain cheese, baby leaf spinach, and topped with  chives and Grana Padano shavings. 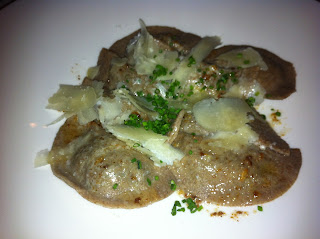 The rye pasta added an interesting texture (slightly more firm than regular) and taste (earthier) to the dish. The sauce was a very light butter/olive oil combo.

Those of you that know me, know I don't eat dessert very often. However, when the waiter mentioned they had a house made apple strudel, I couldn't resist. The pastry was flaky and light, the apples were firm and crispy and the vanilla ice cream was perfect. 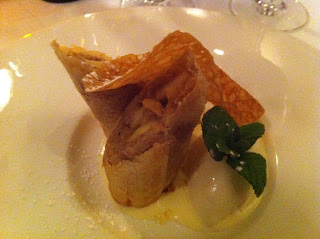 All in all a very pleasurable meal. If you are in the Fairfax, VA area, this place is worth a try.

Oh, I forgot to mention, it didn't hurt that the wine we drank was Lodali Rocche Costamagna Rocche Dell’Annunziata Barolo DOCG ’05.