Last week I wrote about trying to keep the breakfast carbs to a minimum. Well, for this weeks version of Meatless Monday that didn't work out so well. My wife is from from a part of central Connecticut that is stocked with a broad variety of ethnic cultures and their respective foods. There are a lot of eastern Europeans and one of the things they do very well is bake. Breads, pastries, you name it, they do it well. The other day, Cynthia comes home from Wegmans with this. 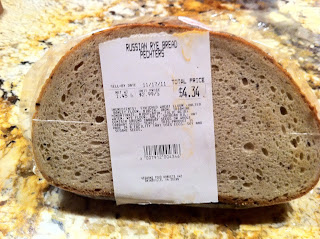 Who can turn down a good Russian rye bread? Two slices toasted and buttered later, I've had a not so low carb but very tasty breakfast. Not as good as back in the Northeast, but pretty darn good.

I had decided to go to an Indian restaurant near my office for lunch that several of my coworkers had spoken highly of. I figured their buffet would offer a pretty broad variety of vegetarian dishes. Turns out they are closed as the sign on the door said "every Mondays". Back in the car I drove where else, but to Wegmans. For those of you that don't have this supermarket chain where you live, my condolences. Those of you that do, know that they offer a huge variety of choices for lunch. Everything from pizza, sandwiches, hot buffet cold buffet, salad bar, dim sum, a noodle soup bar and sushi. They have two huge banquettes with hot and cold vegetarian foods on the buffet! Here's what I ended up with. Broccoli, cauliflower (two ways), carrots, scalloped potatoes, a cream cheese filled jalapeno popper (OK, I had to have one fried thing) and a piece of grilled naan. 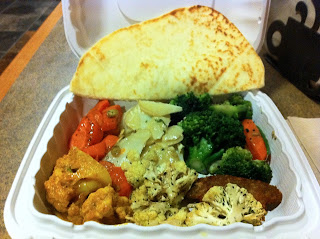 Dinner was a real treat. Cyn managed to whip up something really special. Two courses, a simple blanched Peruvian asparagus 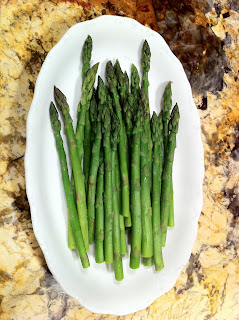 and a beautiful mushroom ravioli 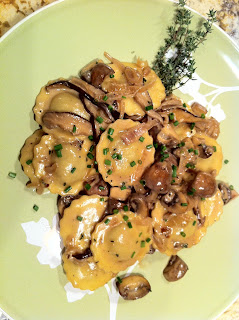 The ravioli were stuffed with portabello mushrooms but, as usual, it's the sauce that makes the dish. Cyn started by browning shitake and crimini mushrooms in extra virgin olive oil and butter on high heat. Once they were brown and had released their moisture, she added two french shallots and fresh thyme from our garden. Once the shallots were translucent, she de-glazed the pan with Madeira and added some cream. Once the cream had reduced by a third, the ravioli were added to the sauce to finish their cooking. A sprinkling of chives finished the dish.

Sounds complicated, right? Well, this was made in just about 30 minutes. Eat your heart out Rachel Ray.
By A Reluctant Foodee at November 14, 2011