'Twas the day after Christmas....

.....and we spent most of this Meatless Monday in the car. Like many of you, we traveled to visit family this Christmas. In our case, it was Cynthia's family in central Connecticut -  a mere seven hour, 400 mile ride from our home in northern Virginia. I'm not complaining mind you, it's just that when I realized we would be on the road most of the day, I knew eating meatless would be a little more challenging (and probably less interesting). Turns out I was right.

Skipping to the bottom line, I managed to eat meatless. We diverted off the interstate long enough to stop at Marty's bagels in Orangeburg, NY, my go to place when I used to work in that area. A buttered everything bagel hit the spot, but I'll admit the egg and cheese on a bagel that Cynthia had sure smelled good.

Further down the road we stopped at a diner in Pennsylvania. I love diners. Growing up in the New Jersey, diners were a routine part of my childhood. Our experience with diners in Virginia so far has been, shall we say, less than overwhelming.

This one was called Miller's on Route 15 south of Harrisburg. They served up a pretty nice bowl of french onion soup. It looked like the diners of my youth, was packed to the gills (we sat at the counter) and had the classic diner menu the size of the old Manhattan phone book (you remember phone books, right? Well, it was really thick). I added a grilled cheese, and there you go, meatless lunch. 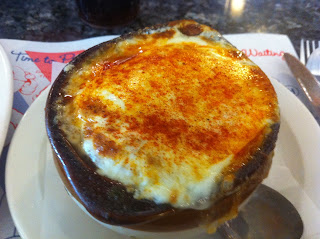 We got home in the middle of the afternoon, picked up Jack and Cooper (yeah, yeah, I know, gratuitous pictures of the dogs) 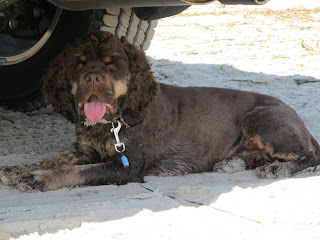 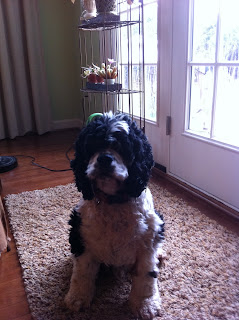 and realized we hadn't thought about dinner. Neither one of us felt like doing anything complicated so we resorted to something we don't often use - frozen food. If you've never tried it, Amy's Organic offers a line of frozen entrees that are both tasty and reasonably good for you. I settled on a  Mexican entree that included a cheese enchilada, refried beans and corn. 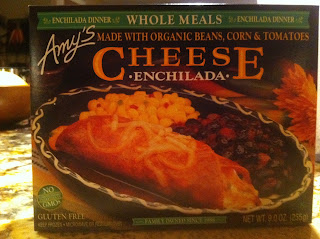 We added a nice big salad and called it a day. Not the most exciting Meatless Monday menu, but it did complete two full months since I started this journey.
By A Reluctant Foodee at December 27, 2011