Life is full of disappointments....

Ever go to a restaurant for the very first time, have a really good meal, and then go back and be utterly disappointed? Yeah, I hate that - and it happened last night. I'll admit that the time between the first visit and the second was more than a year, so there could have been major changes in anything from the suppliers to the kitchen staff, but the differences were significant.

The restaurant in question is Ciro Ristorante in Aldie, Virginia, about 30 minutes from our home. We met our dear friends, David and Suzanne there expecting a repeat of the very nice experience we had more than a year ago.

Things started out well enough when we were greeted by the owner who personally seated us and spent time talking with us. The restaurant is clearly family owned and run.

My first course was the Juliano Salad, described on the menu as mixed greens with walnuts, goat cheese, crispy pancetta and black berries in a house balsamic. Well, all the ingredients were there, but the blackberries had no flavor (not surprisingly so far out of season and certainly from somewhere south of the equator), the pancetta was cubed, not shaved thin, and cooked until it was overly chewy and the walnuts were candied. Don't get me wrong, I like candied walnuts, I just wasn't expecting them. To be fair, the dressing was tasty, the greens were fresh and the goat cheese was fine. 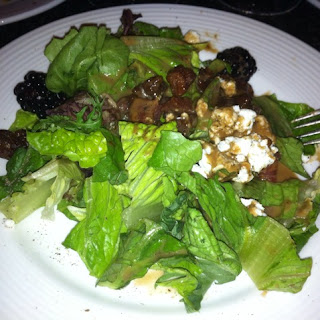 Not the most awe inspiring presentation either huh?

OK, the main course was coming to the rescue, right? Good veal, cooked right can be a beautiful thing. Done right, you shouldn't need a knife to cut it. Let's just say that this wasn't the best cut of veal I've ever had. It wasn't awful, it just wasn't great. Tough enough to require a knife and breading that was a little gummy. The Marsala sauce was tasty enough and the mushrooms were fine. It was served with a linguine that was nothing to write home about. 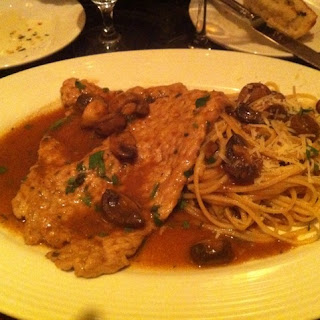 Although I didn't eat it, Cynthia and Suzanne shared a cold seafood salad that was offered as a special that contained baby octopus, calamari rings , mussels and, supposedly, baby shrimp which turned out to be missing in action. Both noted that the lemon based dressing was overdone to a point of making it difficult to enjoy. I believe Suzanne felt strong enough to point this out to the waiter. Cynthia told me later that the octopus was rubbery.

A few pluses: the wine was good and affordable (a nice Montepulciano) and the portions were generous, Cynthia and Suzanne enjoyed the berry cake dessert they shared.

Might it have just been a bad night? Possibly. Will I go back anytime soon? Well.......