Mac and Cheese - for Grownups

Who doesn't like mac and cheese? The ubiquitous dish borders on having the same level of appeal as hot dogs, hamburgers and apple pie. Kraft, for one, has made a fortune on it. There are plenty of other "prepared" versions out these these days, like Amy's organic, which actually isn't bad. But nothing beats a homemade, from scratch version. Yup, that's what we had for Meatless Monday last night. It wasn't, as the saying goes, your grandfather's mac and cheese.

First course, was a simple salad using romaine, radicchio and from our cold frame a mixture of the baby Red Cardinal spinach, Bright Lights swish chard and a mesclun mix. Red and yellow peppers, cucumber, a couple of green olives and dried cherries finished it off. 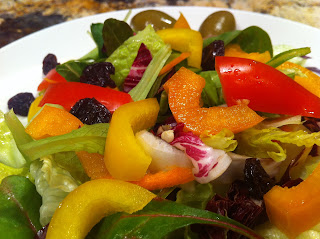 If you've been following along, you know I haven't given away many recipes. I'm going to try to do a better job of that going forward, so here goes.

Let me start out by saying we like spicy. Not spicy in the sense of so hot that the flavor of the food is lost, but enough heat to enhance the flavors. The basic recipe comes from Cook's Illustrated New Best Recipe book and is listed there as "classic macaroni and cheese". Fair enough, but we weren't looking for classic. Here first, is their recipe, I'll list the modifications later.

Well, we made a few modifications along the way.

We split the pound of cooked pasta in half so we could make a "non-spicy" version for friends.

Our cheeses were 8 ounces of sharp cheddar, 7 ounces of monterrey jack and 1 ounce of asadero.To this we added 8-10 grates of fresh nutmeg. We added 1/2 of this cheese mixture to 1/2 of the pasta for the non-spicy version.

To the remaining cheese mixture, we added 1 can of drained Ro-Tel tomatoes and green chillis, two tablespoons of adobo sauce and 1 chopped chipotle pepper. Of course we added the optional cayenne pepper from the original recipe also. 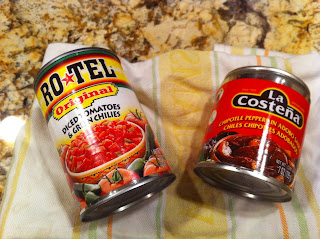 For our half of the topping, we used 1/4 cup seasoned bread crumbs which were mixed with two tablespoons of butter, 1/4 cup pecorino romano cheese and 1/3 cup panko. 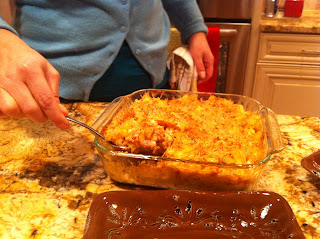 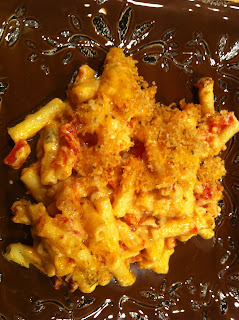 The rich creaminess matched with the flavorful heat is wonderful. It's not for everyone, but if you like spicy, this may be your new favorite way to enjoy an American classic.

We chose one of Cynthia's favorites beers to compliment the dish, Duck-Rabbit Milk Stout, creamy and dark, but not too heavy. 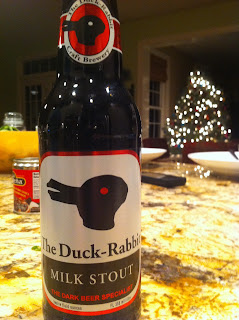