If you read this, you know that this past weekend was a kind of a meat-a-polooza. Heavy (but delicious) German food that featured schweinhaxen (braised ham hock) on top of a spicy sausage dressing. That was my main course on Saturday night. I have to be honest and admit the leftovers were pretty tasty on Sunday too. Good thing Meatless Monday arrived just in time.

A couple of weeks ago I wrote a post about tacos and making the tortillas at home. You can see that post here. What you can't see there is the funny little email I got from one of my coworkers who had read the post. She, who will remain nameless, is from California you see, said something along the lines of "nice tacos, but let me know when Cynthia masters corn tortillas and I might be interested". OK, it was probably worded a little nicer than that, but who can remember such things?

My wife, never one to back down from a challenge, immediately ran out and picked up some masa (Maseca brand) and was just waiting for the right time to use it. Meatless Monday seemed to be the perfect opportunity. On top of that, it gave Cyn a chance to make something from her very favorite chef, Rick Bayless. Not only is he her favorite chef, but he is the owner/operator of what I think she would tell you without hesitation, is her favorite restaurant, Topolobampo in Chicago. And this from a woman who knows food and has been to a lot of really good restaurants.

So, she set about to create her version of Chef Bayless's Tacos of Creamy Chard, Potatoes and Poblanos. The original recipe is designed for 16-18 soft tacos, but since there are but two of us, she cut the recipe in half. She also modified a few places based on our particular tastes. Here is Cynthia's version, adapted from the original Bayless recipe. 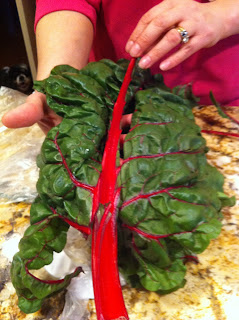 Preparation
Cynthia added the following touch which was not a part of the original recipe: 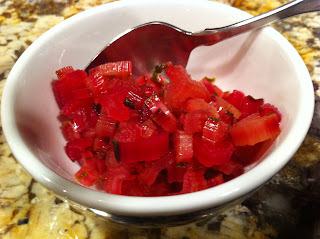 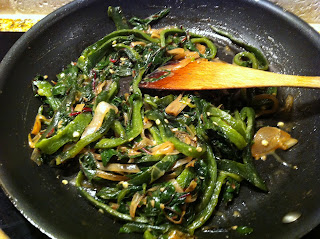 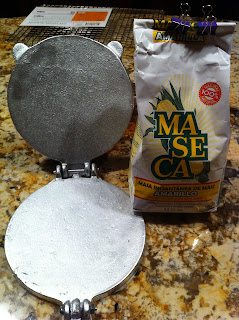 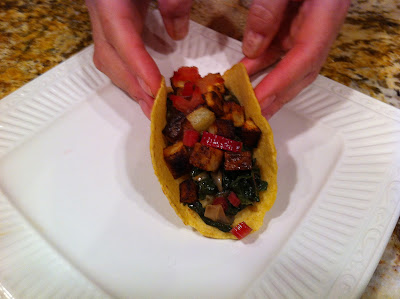 Assemble components in a tortilla to your taste. Fold up edges, and there is your taco!