A Healthy Cabbage and Bean Peasant Dish for Meatless Monday

Sometimes you just have to go with what you've got.

We've been very busy lately with yard projects (we're building a koi pond, getting our vegetable beds ready to plant, etc), so Meatless Monday kind of sneaked up on us this week. Late Sunday night, Cynthia asked me what I wanted for dinner on Monday. Our usually well stocked refrigerator and cupboard were a little lighter than usual, but there was a fresh head of cabbage staring back at me when I opened the fridge. We decided to make that the star of the next night's dinner. Twenty minutes of internet browsing later, we had our answer. On the New York Times Fitness and Nutrition site, we found a recipe by Martha Rose Schulman, the author of "The Very Best of Recipes for Health". Not only did it sound tasty, but we had all the required ingredients. She called the dish Baked Giant White Beans with Cabbage. Since we followed the recipe fairly closely, I'll simply link to the original here.

We love beans and we always have a good supply of them in the pantry. We also always have Parmesan rinds on hand. They end up in soups, stews and especially pasta e fagioli, very simply my favorite comfort food of all time. Carrots, onion, garlic and the herbs were all on hand so we were set to go.

As Ms. Shulman says in her recipe, the Parmesan rinds really do add an element to the dish that mimics the richness that a more classic version would have due to the addition of a ham bone or salt pork. The slow cooking method really sweetens the cabbage and "melts" it nicely, again adding to the overall body of the dish.  Finally, and this is a brilliant touch, the addition of the garlic in two stages, we believe, added a depth of flavor that we really liked.

During the preparation, Cyn, as usual, made a few, "on the fly" adjustments. A little of the Better than Bullion No Chicken stock was used instead of salt to season the dish, extra carrots and onion were added, and a bit more water than originally called for, so the final dish had more of a soup consistency.  The soup was also cooked in the oven, since no one was home to babysit it and Cyn was too lazy to haul out the slow cooker.  (Cyn is writing this paragraph, so it's okay if Cyn calls herself lazy.  This third person thing is weirding me out.)  6 hours in a 250 degree oven in a tightly covered stockpot. 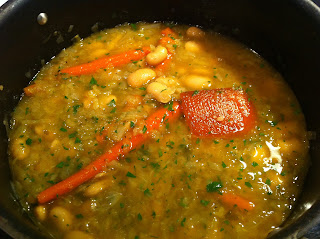 The finished plate, served with a whole grain french miche bread for dipping, was as delicious as it looks. 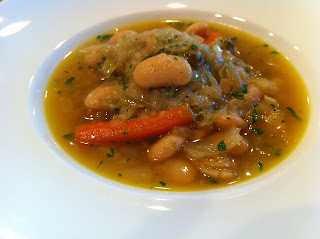 **NOTE - If you're following the original recipe, please soak your dried beans overnight before proceeding with the recipe as written.  It seems that step was missing from the original.
By A Reluctant Foodee at March 27, 2012