This past Saturday night, we kept up our tradition of going out to dine on the first Saturday of the month at a restaurant we hadn't been to before from the top 50 list published in Northern Virginia Magazine.We've been on kind of a roll -- well, at least for the past two months we have been. In April and May we had two really great meals at The Restaurant at Potawmack Farm and The Market Table Bistro respectively, both in Lovettsville, VA. We had high hopes for continuing this trend when we picked Sea Pearl in Falls Church, VA for our June outing. For the most part, our hopes were fulfilled. We'll explain the qualifier later.

The restaurant is,as the name implies, focused on seafood. What is not as evident from the name, is that the food is all prepared with an Asian flair. This is much easier to understand when you find out that the owner/chef is Sly Liao, born in India to Chinese parents. It should also be noted that his wife is one of the sisters of the Vietnamese restaurant Four Sisters, almost directly across the street, a former Top 50 joint.

When you first enter you are immediately in a very handsome bar, quite large and visually appealing. There is a smaller lounge connected that has an almost Las Vegas feel to it. The dining space is themed consistent with the name and there are reminders of the sea everywhere. Curtains constructed of mother of pearl discs separate the bar area from the dining space.

Service was prompt and very professional. Our waiter was polished and went out of his way to ask if we had been there before or if we had any questions about any of the dishes. He also pointed out that their "signature" dish was the oven roasted Chilean Sea Bass.

First Course (Al)
There are quite a number of very interesting and appealing first course selections on the dinner menu and I waffled back and forth for a while before settling on the onion and zucchini pakora. Found throughout southeast Asia, pakora is made by battering any number of ingredients in chick pea flour and deep frying them. This was obviously a nod to the chef's Indian roots. Think really grown up onion rings, with a fine julienne of what had to be baby zucchini added. Someone in that kitchen knows how to fry things. The oil was obviously hot enough to get the finished dish that GBD (golden brown and delicious) state that all fried food should aspire to -- without any trace of being oily. As good as the pakora was, the two dipping sauces served with it were even better. The first was chilli/cumin/cilantro, and for someone who isn't all that fond of cilantro, it was mighty tasty. But I've saved the best for last. The second sauce was a tamarind chutney that was somehow both sweet and savory and had me asking the waiter if he could sell me a bottle of it. It would be good on anything -- even ice cream! 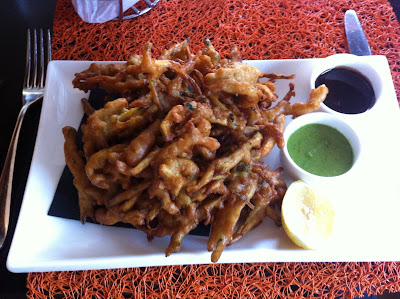 First Course (Cyn)
It was high, it was stacked, it was tasty.  It was predictable, safe, and dare I say it, boring?  I wanted a  little more crunch than the small spoon of tobiko-on-the-side provided, and the tuna a little less mangled but more precisely cut.  I know tartar is the saving grace for many a kitchen, where the trimmings of a beautiful piece of fish are turned into a wondrous dish, but please, don't let me imagine I'm eating trimmings because of sloppy knife work.

Presentation:  beautiful, who could complain?  Taste:  lovely, everything fresh and harmonious.  Soul:  nope, not even a little. 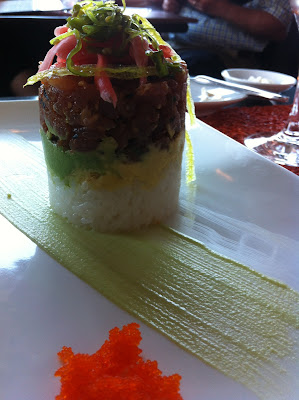 Main Course (Al)
I swear, I'm not easily swayed. I ordered the sea bass because I wanted the sea bass, not because the waiter told me it was the signature dish. Really.

Patagonian Toothfish is marketed in most of the world as Chilean Sea Bass. I think even the most inexperienced marketer can see why. I can only imagine the pitch meeting where the creative types wracked their brains trying to find a way to make it sound appealing. Asa side note, it should be noted that it is illegal to call Patagonian Toothfish Chilean Sea Bass in the UK. Who knew?

I like this fish. It has a firm white flesh, a mild taste and can prepared in a pretty wide variety of ways all of which allow for another flavor element to shine. I've eaten this fish in a lot of restaurants and I'd have to say that this preparation was one of my favorites ever. One thing I've learned over the years is that you can make a good piece of fish into a bad dinner but you cannot, regardless of the skill of the chef, turn a bad piece of fish into a good dinner. This was a good piece of fish.

Cooked to perfection (for me that is just past medium rare but not far enough toward medium that it starts to dry out), and glazed with a shiro miso that added both sweet and salty notes. It was topped with a few small jalapeno rings that elevated the heat quotient just enough. Accompanying the fish was braised kai lan tips (OK, I had to look this one up). It's also known as Chinese broccoli and was reminiscent of broccoli rabe but less bitter. A coconut jasmine rice provided the starch and was topped with julienne vegetables. Everything on the plate was excellent. 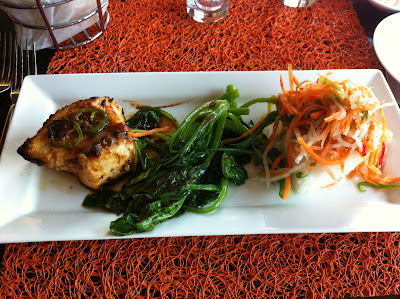 Main Course (Cyn)
Fat and juicy grilled shrimp were paired with edamame, potato, scallions, water chestnuts, carrots and peanuts in a play on the flavors of Kung Pao, and sent out with a small bowl of sriracha aioli.  It was hot and spicy, the veg were alternately crunchy and tender, the flavors melding but not lost in the Kung Pao seasoning. The sriracha aioli with the shrimp was absolutely the highlight of my meal.  I thought the aioli would overpower the delicate flavor, but the creaminess of the mayo base hits you first and then the chew and ocean of the shrimp and then pow! the sriracha heat marries Kung Pao spice for an explosion. You need to have another bite.  When it's all gone, you're sorry.  If I had been at home, I would have picked up the shrimp tails, dipped them in the aioli and sucked out the last little morsels after chewing on them for a bit.  Classy chick, I know. Luckily I know when not to embarrass my dinner companion. 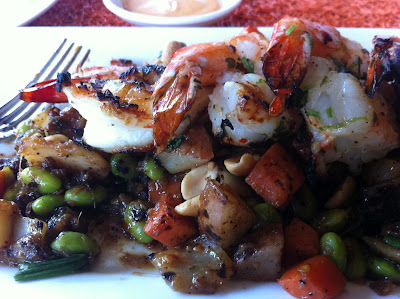 Summary (Al)
Was this a good meal? Yes, actually it was better than good. This kitchen has it's act together. They are buying good ingredients and preparing them expertly. Even more importantly, they are doing all that without trying to be overly clever. The dishes are well thought out, the flavors all made sense together and they stayed true to their stated theme - Asian influenced seafood. The service was good without being overbearing. The wine list looked good (we did not have any) and the beer menu was just good enough to make someone like me happy.

So, am I over the moon about Sea Pearl? Well, for the food, yes. The overall experience, not quite. This may not be completely fair but, to me, it seemed like a hundred other restaurants that I have been in before. In a word, it felt corporate -- the kind of place you can take a client and he would be impressed. There was nothing special about it. It may be that our last two experiences were both so memorable. I don't know, maybe I'm being overly picky.

Summary (Cyn)
Eh.  I'm jaded (no Asian pun intended).  Reception was warm and welcoming.  Restaurant is beautiful, tranquil and the energy excellent.  Server (thanks Samir) was professional, personable and prompt.  Food was very good.   Why am I not impressed????  Everything was just a little too slick and rehearsed.  There wasn't any intimacy, with the restaurant, staff or food.  No connection.  (Well maybe a connection with the sriracha aioli.)  Would I go back?  Absolutely!  But next time, I'm heading to the bar, where it looked like the bartender was having a great time with his diners, and they, all strangers, were having a great time with each other.  The Happy Hour menu looks like it has soul --can you say "pork belly bao?" -- it just may be the intimate piece of the puzzle.