What's going on in Lovetsville, VA?

Lovettsville is a bucolic little town in extreme Northern Virginia, near the Potomac river and close to both the Maryland and West Virginia state lines. The 2000 US Census listed the population at 853 and the 2005-2009 American Community Survey listed it at 1187. It was originally settled by German immigrants in 1722 and was then called The German Settlement. It's a little less than an hour north of where we live and, for the second month in a row, we went there for what turned out to be a really good meal.

Last month we had a truly extraordinary meal at the Restaurant at Patowmack Farm and we filed this report. This past Saturday night we went back to Lovettsville and the Market Table Bistro. After another much better than average meal, it's clear that something good is happening in Lovettsville.

The restaurant is an unimposing building on the main street in Lovettsville. We were warmly greeted and seated immediately. The main room is comfortable and bright. The staff, from the hostess who seated us, the young lady who served us water, and the waitress who not only served us but treated us as long lost friends finally come over to see the place, were all clearly well trained and couldn't have been more pleasant.

The menu focuses on local ingredients and Chef Jason Lage is a staunch supporter of the farm to table concept. We started by sharing one of the "small bites" offered on the menu for $5.00 each. The warm Mediterranean olives with garlic, rosemary and peppadew peppers were served in an extra virgin olive oil sort of dressing.  It was perfect for dipping the made on premises farmhouse white bread. This may seem like an exaggeration but it may be the best $5.00 food item I've ever had. Sometimes it's the little things in life. 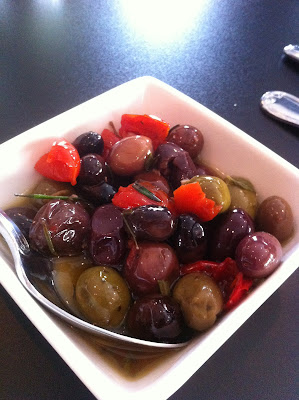 First Course, Al
Lots of good choices but I knew what I was going to have as soon as I saw it on the menu.The Market Table Bistro Mac and Cheese had my name all over it. I'll admit I was tempted by the Pinto Beans and Pork Chilli, but the blend of Gruyere, cheddar and asiago cheeses with Kites country ham, Riscossa pasta and fresh herbs was too hard for me to pass up. It was served, directly from the broiler, in a cast iron dish with the cheeses still bubbling. It was rich without being heavy. I could taste and identify each of the cheeses and the herbs were noticeable without being overwhelming. I really liked this as a starter and did everything but lick the last little bit of cheese from the bottom of the dish. 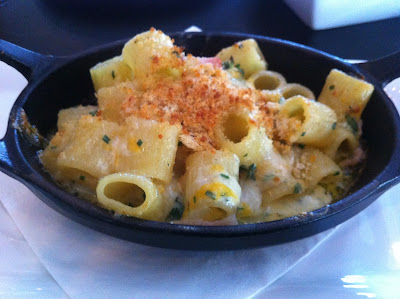 First Course, Cyn
For the record, once we started on the olives, I kinda sorta wanted to change my appy order to another bowl of those bad boys.  They were a perfect mix of at least 6 different olives, all with their own unique flavors, sizes and colors,  marinated in slivers of garlic, spicy red peppers and rosemary - pretty sure a bottle of red wine, a loaf of their gorgeous house bread and a hunk o'cheese would be a perfect picnic meal at WolfTrap concert this summer....but I digress.

The Velvety Black Bean and Chipotle Soup was indeed velvety and chipotle-y, the earthiness of the black beans playing nice with the rich spiciness of the chipotle.  Chopped chives and creme fraiche were perfect garnish, the dollop of cream providing a respite from the not unwelcome heat of the chipotle.  Although not an inspired combination, it was perfectly executed.  I love soup as a first course, and this one was terrific for waking up those taste buds and honing the edge of hunger.  Add one of the two choices of salads on the menu and it'd be a great lunch, add a dessert to that, a great dinner. 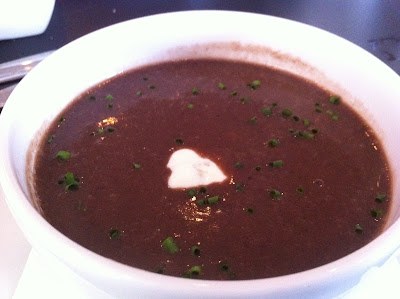 Entree, Al
Again, there were several things I wanted to try so making a decision was not easy. There was their version of shrimp and grits called Laughing Bird Shrimp, and a Spring Mushroom Pasta with, among other things, truffle oil, each of which got some consideration.

In the end, I went with the Crispy Wild Chesapeake Blue Catfish served with Plumfield Plantation rice, black eyed peas and a lemon caper butter sauce. I was unfamiliar with the term blue catfish and wanted to try it to see if I could discern any difference from my days of living in Alabama where I learned to love catfish. Apparently it is one of the larger species of catfish and can grow up to 65" and 150 pounds!  Good catfish done well, is a wonderfully light and flavorful fish. It can, however, sometimes have a "muddy" flavor. They are, after all bottom dwelling opportunistic eaters.

This catfish was everything one could want. Prepared perfectly, crispy of the outside but super tender on the inside the rice and black eyed peas took up the flavor of the lemon butter and the capers added a slight bit of brininess that was welcome. Oh, and did I mention it looked nice too? 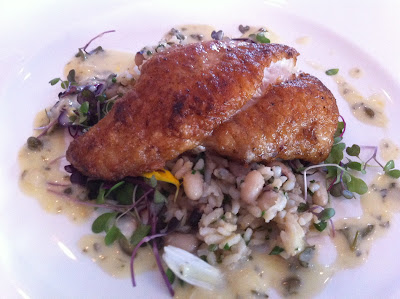 Entree, Cyn
There were 7 or 8 entree choices on the menu.  I would have happily eaten all but one - the salmon - my old Enemy.  I don't have a problem with salmon my brother has caught, or anything smoked or raw, but farm raised salmon doesn't taste like salmon should.  Perhaps I am a salmon snob?  I don't even ask whether the salmon is wild or farmed anymore, I just don't order it.  Except for this one place in King of Prussia, PA, where they made a fabulous BBQ salmon.  I ate it for lunch at least once a week in my previous life as a Financial Analyst.  But again....I digress.

There are some dishes that if done well, elevate a humble ingredient to rock star status.  Risotto is one of those for me.  A simple fat grain of rice is transformed into a creamy unctuous amalgam of flavor, studded in this case, with crunchy, chewy, slippery spring vegetables.  With a mirepoix base, peas, ramps, spinach and asparagus rounded out the generous portion, and it was garnished with edible flower petals and sprouts of some kind - most likely radish.

The rice was perfectly cooked, a little tooth left to the grains, and the veg were tender and crisp.  A quick  microplane grating of parmigiano on top and the proper seasoning - a filling yet light dish.  Yes, I said light!  Risotto is not supposed to be slathered in cream or butter - that's lazy man's risotto.  Someone who didn't care enough to stir to coax the starch from the grains, but cooked the rice and added fat to simulate the starch.  This restaurant clearly has a team in the kitchen who cares, their risotto is delicious.  And light. 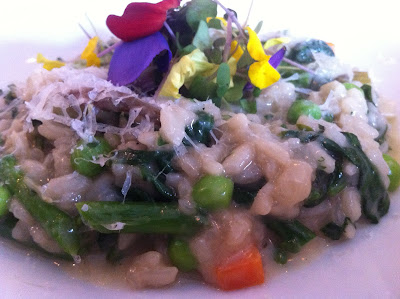 Bottom Line, Al
All in all this was a very good experience. The service was above average, the setting was pleasant and welcoming and the food was very good and a good value. The attention to detail and devotion to fresh, local ingredients was obvious and appreciated. I guess there IS something going on in Lovettsville and that something is good food. The Market Table Bistro is a strong part of that.


Bottom Line, Cyn
Dessert offerings were many, and I thought a little boring for the caliber of food to this point.  A creme brulee, a cheesecake, some chocolate thingy - typical desserts.  There was a salted caramel pudding that sounded delicious and a skillet chocolate chip cookie and milk combo.  But nothing intriguing enough to get me to pull the trigger.  Where have all the pies and tarts gone?  I could write a manifesto on the dearth of interesting desserts, they've all been dumbed down for the masses.  Sorry for the rant MTB, you don't deserve the brunt of my dessert desertion!  But a little almond crusted tart filled with a basil pastry cream and the season's first strawberries would have been lovely.  Just sayin'.

I wish the Market Table Bistro were closer to home.  The superb wait staff, very reasonable prices and care the kitchen takes in preparing beautiful and tasty dishes would ensure I was a regular.  As in at least once a week.  How about a satellite location???