Some foods are magical. They evoke happy memories of people, places and times and can be very powerful. Most often, they are memories of childhood and family. I grew up the product of an Italian Father and a Mother who was mostly English and German. As in most households at the time, Mom did most of the cooking but there were those special occasions when my Dad would take over the kitchen. As I'm sure many of you know, every Italian family has a spaghetti sauce (gravy, if you must) that is from a recipe that verges on being sacred. We did -- it came from Calabria with my grandparents and was spoken of in hushed and reverent tones. In our home, my Dad made the sauce, but that's not what I'm writing about today. There was one other very important meal he prepared and it's the one that, even more so than the sauce, evokes those strong, deja vu like feelings. I'm talking about pasta e fagioli, or in English, pasta and beans.

When Cynthia first started making pasta e fagioli for us, she followed my family recipe religiously. Over time, as is her wont, she tweaked a little here, a little there and (forgive me for this oh ancient ancestral spirits) made it better. One important component that did remain the same in both the original and Cyn's improved version was the addition of a good sized hunk of salt pork to the soup as it simmered. The richness and depth of flavor that it contributed was noticeable and delicious.

So when I asked if we could have pasta e fagioli for Meatless Monday last week, she looked at me like I had lost my mind. "What about the salt pork?" she said. "Just leave it out" was my ill-considered answer. After she stopped laughing, I saw the wheels start to turn and I knew I was going to get a perfectly delicious, meatless, version of pasta e fagioli for Monday dinner. Here's how it came together.

This is not a dish that is put together quickly, so if you need something now, this isn't it. 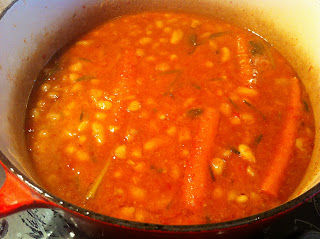 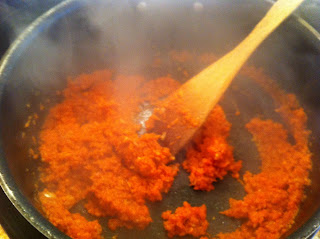 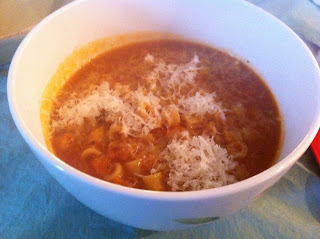 Note: This soup stores and reheats wonderfully with the addition of a very small amount of water to the leftover portion.

Did I miss the salt pork? I won't lie, I did, a little. But that may be because the taste of this soup is so hard wired into my senses that I noticed the difference. Was it still good? Absolutely!

There are literally hundreds of pasta e fagioli recipes floating around out there. I've had quite a few other versions over the years but this one remains the best. If you've never made it using the rinds and the battuto method, try it once this way. You'll probably never make it any other way again.

Visit my blogger friends at Delicieux_fr and Eat Your Veg!