It's been nearly a full year since I started writing as A Reluctant Foodie. I’ll admit to having been a little lazy about posting lately, but this is my 83rd posting -- not bad for someone who hadn’t written much since college ( I won’t date myself by telling you when that was). In that year I've learned a lot about myself, blogging and social media in general.

Like every other new blogger, my biggest challenge was getting people to actually visit and read what I had written. I figured out pretty quickly that the best way to drive traffic to the blog was through Twitter. So, @ReluctantFoodee was launched on Twitter. Yes, I know it is spelled wrong -- @Reluctantfoodie was taken. At first, I struggled to get followers but as of this writing, I have over 1,400 followers! I'm proud to say that since I don't buy followers, rarely follow back commercially oriented people/businesses and I block the obvious spammers my follower count is pretty pure.

A few amongst this illustrious group have become friends, as much as people who have never met can be friends. One in particular stands out. Anneli is an Englishwoman living with her husband and children in the French Pyrenees. She is a private chef who blogs at Delicieux . You really should check out her out.
Recently, in an effort to pull me out of my writing funk, I proposed that it might be fun for both of us to prepare the same basic dish and to guest blog the results for each other. Now, in the spirit of full disclosure, and I've pointed this out in many of my other posts, I don't cook. The culinary talent in our home is all with my wife Cynthia. I eat, clean up and write, period. So really, Cynthia and Anneli decided to make the same basic dish. There, I feel better now.

If you're a regular reader you know that Cynthia and I garden a good bit. We try to grow a reasonably wide selection of veggies because they are so much better than anything you can buy at even the best supermarkets. When Anneli and I hatched our little plot, we happened to have a goodly number of ripe peppers ready to be harvested. We agreed on stuffed peppers as the common dish because, everyone loves a good stuffed pepper, right?

Here is the recipe Cynthia put together for the great stuffed pepper challenge! 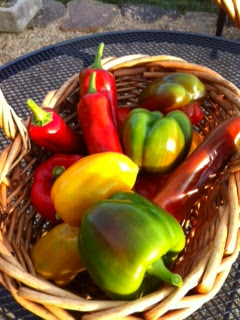 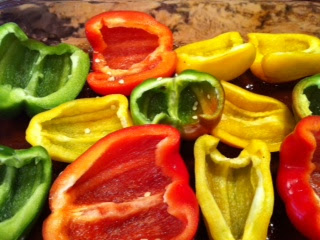 Preparation
In a large mixing bowl, place beef and room temp rice.  You'll be adding ingredients to this bowl as we go, so size accordingly.

Cook bacon in skillet until crispy.  Remove from heat and set aside to drain.  Leaving bacon fat in pan, add enough additional oil so you have a nice thin coat of fat in the pan.  About a tbsp total.

Saute onions on med-high heat until soft.  Dump on meat and rice.

To make the sauce:  Put the pan back on medium high heat, add 1 tbsp veg oil and when hot but not smoking, add curry powder and red pepper, stirring constantly.

When fragrant, about 30 seconds in, add garlic and tomato paste.  Cook for a minute or so - the fragrance should be roasty, but not burned.  (If your curry or garlic burns, start over.  The bitter taste will never go away.)

Add the sherryaki mixture (get it, sherry-aki) and whisk a bit to remove all lumps and smooth out the sauce. Simmer for 10 minutes, until you taste the sauce and the alcohol from the sherry isn't prevalent.  (If this doesn't happen, you need to buy better sherry.  I use an amontillado that I also drink as an aperitif.  If you can't drink it from the bottle, it won't get better with cooking.)

Season sauce to taste with salt and pepper.  Add more crushed red pepper if you like a little hurt.

Add about 1/4 cup of sauce to the bottom of a baking dish.

Add half of what's left to the meat, rice, onion and bacon mixture. Mix thoroughly but gently.

Fill pepper one at a time and place in baking dish.  It helps if it has high sides and holds the peppers snugly. If all you've got is a low rider, cut peppers in half instead of removing top.  Not as pretty, but I like the ratio of pepper to filling better this way.

Before covering with foil (I parchment first then foil) distribute the remainder of the sauce on top of the peppers. 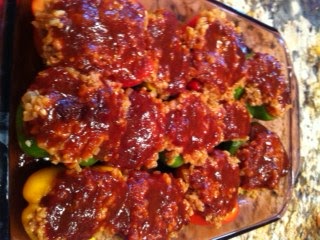 Bake covered for 45 minutes at 350.  Uncover and bake an additional 15.  The sauce takes to browning very well, so if you're of a mind, a low broil helps you get your brown on. 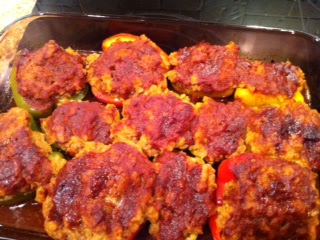 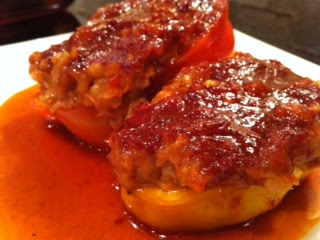 Email ThisBlogThis!Share to TwitterShare to FacebookShare to Pinterest
Labels: Our Garden, stuffed peppers