I am delighted to be back here on A Reluctant Foodie doing another guest post for Al. Our last challenge (Stuffed Peppers) was such fun that we decided to do it again and this time I suggested 'Balls"!

'Balls' was a fun choice as it gives such a large scope for experimenting - meatballs, fish balls, rice balls, chocolate balls, ice cream balls...the possibilities are endless. Not to mention the childishness of repeatedly writing 'balls'!! (and yes, I'm 36, not 3!)

In fact, I had no trouble at all deciding which 'balls' I was going to make, it was inevitable. I am half Swedish and I was brought up in a house where certain Swedish foods were regulars at our table. I was aware of Ikea and their meatballs before the rest of the world began their love affair with them.

My Mormor (Grandma) used to make them fresh and serve them with dollops of sweet lingon berry sauce, boiled potatoes and delicious creamy gravy. I remember how she would break up my potatoes for me and then pour over the sauce and mix it in....it was heavenly.

Even Ikea's processed meatballs are pretty darn good. I don't think I have ever met anyone who doesn't know of them and in fact, love them! Doesn't everyone who shops at Ikea stop for a plate of their Swedish meatballs? They make the whole nightmare experience so much more acceptable, if even just for a few minutes. My kids gobble them up as though they were chocolate not meat. My homemade meatballs really do taste like Ikea meatballs, just much better!

Swedish meatballs are superior to all other meatballs in my opinion. They have a lighter texture...not too dense or crumbly. They are simply seasoned so that the quality of the meat remains the main flavor. And to top it all off, they are called 'kottbullar' (pronounced "shurt bullar') *she childishly giggles again*!


The key to these balls is two fold. Firstly, the meat is a mixture of  70% beef and 30% pork - good quality mince. I got mine from the local butcher, no scrimping. (My Mormor would also add some chicken liver for a really luxurious meatball. Secondly, to achieve the lightness, quite a lot of breadcrumbs soaked in milk and cream are added to the meat before shaping into balls. This makes the mince quite wet and loose in texture. It might seem a bit strange butstick with it, the end result is unlike the usual stodgy balls you may be used to .

My daughter was 4 years old on December 23rd and I decided to make my meatballs for her birthday party. Definitely something that kids enjoy and adults alike. I decided to serve them as a little nibble to pass around during the festivities with some dips. My recipe makes 40+ meatballs so plenty for everyone or enough to make a substantial meal for the family to serve with sides.

These balls are seriously good, I kid you not.....Here's how to make them: 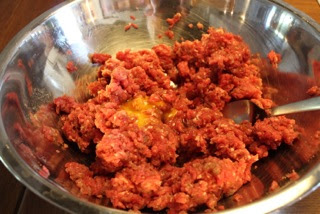 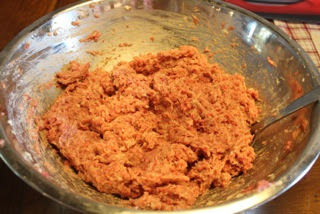 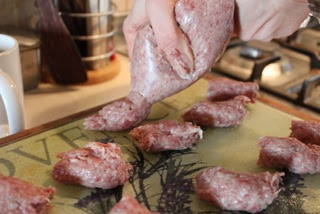 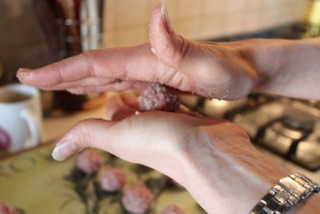 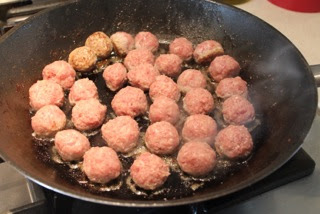 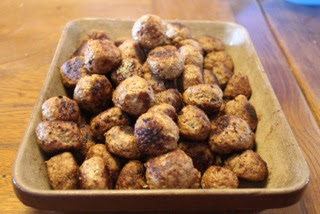 I just wanted to say thanks again to Al for having me come and guest post! Always a pleasure and hopefully it's becoming a regular thing! Please come over to www.delicieux.eu and check out Al's guest post also featuring some amazing balls!!

Biog: I am a Private Chef living in South West France. I am a 36 year old mother of two, living the rural dream. I love to cook all food and am inspired by fresh produce and the cuisine here in France. From rustic traditional dishes to vegetarian fine dining, I try to cook it all and share my journey with you. Stop by and check it out!