One Year Of Meatless Mondays 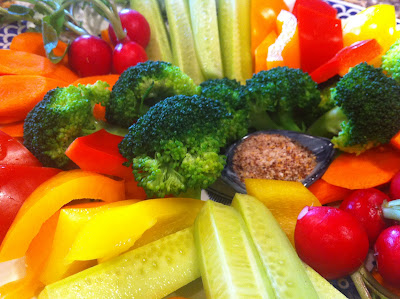 On November 3, 2011, I wrote and posted my very first blog entry.It explained why I was making a commitment to observing Meatless Mondays for one year and why I felt the need to blog about it.Well, here we are a year later and I'm happy to report I did it!

For those of you unfamiliar the Meatless Monday movement, it is a global initiative to eliminate meat products from their diet one day each week (or about 15%). There are lots of reasons to consider going meatless one day each week. Some do it for health reason, others to promote a better environment and others still for ethical reason. In my case, I'll readily admit that my reasons were different (and maybe even more trivial) compared to the others. Very simply, I wanted to see if I could do it. Nothing more, nothing less. It sounded interesting and I wanted to challenge myself. If you want to know more about Meatless Mondays and the global movement, click here.

As I stated in my first post, I'm not a vegetarian. I don't particularly want to be a vegetarian (yeah, that bacon thing). I do however, like vegetables, so the idea of eating more of them one day a week didn't seem that daunting. What I didn't immediately consider a year ago was that I was essentially committing my wife, Cynthia, to a year of vegetarian cooking on those Monday nights were ate at home together. I travel in my job some, so there were probably a dozen Mondays that I was away from home. There were something int he range of another ten when we ate out locally on Monday. That still leaves about 30 Mondays that Cynthia willingly and expertly made vegetarian meals at home. Thanks for being such a willing an supportive partner.

So, you may ask what did I get out of this grand experiment?

First and absolutely foremost is the satisfaction of having made a commitment to do something that I didn't have to do and required a change in behavior and sticking to it for a full year. Secondly, it exposed me to a pretty heretofore unexplored variety of foods that, as it turned out, I liked a lot. During the year, we ate meals that included quinoa, farro, tofu, forbidden black rice, adasi and falafel. (If you haven't figured it out, each of these links will take you to the original blog post on the topic).

Another curious outcome of the past year is that I simply ate less meat - not just on Monday, but in general. There was a higher level of conscious thought about what constituted a "meal". When we ate meat, we both seemed to eat less of it. Instead of two steaks, we would cook one and split it (after all the recommended portion of protein for an adult is around 4 oz). The makeup of our dinner plates morphed in a way that the meat was more of a side dish and the vegetables were more of a main course. Don't get me wrong, I'm not suggesting that this is some path (for me) to vegetarianism - it's not. It is however, a redefinition of how a meal is constructed. For those of you that worry that this type of diet is protein deficient, don't. We ate lots of beans, lentils and other protein rich non-meat foods.

So, after a year, I have decided to stop doing Meatless Mondays. Why? It's not that I have lost my faith in their overall goals. I haven't. In fact, I strongly support what they promote. For me, however, the goals have not only been achieved, but have been integrated into my routine - every day. I eat less meat (more than 15% less than I did before) while still enjoying it when I do eat it. I've discovered that there are plenty of vegetables, grains and fruits that can add taste, texture and enjoyment to meals. I feel like I'm eating a more balanced diet - every day. Institutionalizing it to Mondays no longer seems necessary for me.

If you're interested in reading about some of the other Meatless Monday meals I ate during the year, both at home and out, head on over to A Reluctant Foodie and explore. Thanks for reading!
By A Reluctant Foodee at November 09, 2012